The Ford Focus' running costs should be among the lowest in class, helped by impressive fuel economy

The Ford Focus has always been competitive, rather than class-leading, where it comes to fuel efficiency, but ever-improving rivals have forced the latest model to make a bit of a leap forwards. Clever engine technology, weight reductions and sophisticated aerodynamics help to improve economy, while its inevitable popularity should bring maintenance costs down, but some rivals enjoy stronger residual values.

The biggest fourth-generation Focus engine news is undoubtedly the introduction of cylinder deactivation on the EcoBoost petrol, with Ford claiming such technology has never previously appeared on a three-cylinder engine. It helps the smallest, 1.0-litre Focus to return fuel consumption of up to 50.4mpg. WLTP-rated CO2 emissions of this engine stand at 120g/km, for a reasonable Benefit-in-Kind (BiK) tax rating for company-car users.

Choose the 124bhp version and the eight-speed automatic gearbox in place of the six-speed manual, and CO2 emissions increase to 134g/km, which lifts the BiK bracket considerably. Fuel consumption increases, too, from a decent 49.6mpg to a disappointing 42.8mpg.

The more powerful 148bhp 1.5-litre EcoBoost is a little thirstier than the 1.0-litre, at 46.3mpg and 133g/km, but offers far more power for a more rewarding drive. Above that, the most potent 180bhp version of the 1.5-litre petrol can be thought of as a warm hatchback, but it'll still return 44.1mpg with the manual gearbox. Either 1.0 or 1.5-litre petrol engine makes a sound choice for those who cover fewer than 12,000 or so miles a year, or who make frequent short or urban journeys.

Diesel fuel-economy figures for the Focus are even more impressive, particularly those of the 1.5-litre EcoBlue engine. Available with 94 or 118bhp, both these engines are claimed to achieve over 60mpg, while qualifying for a reasonable BiK rating. The 2.0-litre is offered in two power outputs, with the lower powered 148bhp version returning up to 57.6mpg and CO2 emissions of 128g/km. The higher powered 187bhp version, returns 50.4mpg and CO2 emissions of 148g/km. Both diesel units however, have a higher BiK rating due to their emissions and the extra tax on diesel fuel.

Every Ford Focus is liable for annual road tax of £150. 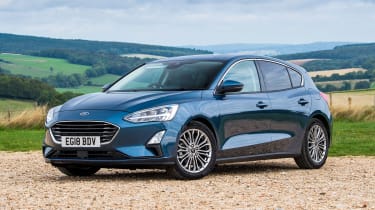 The insurance-group ratings for the Mk4 Focus have been revealed, and it's unlikely that your insurance will be markedly costlier than that of previous models. Indeed, with autonomous emergency braking standard across the range, it's classed as a lower risk than before. The Focus ranges from insurance group 11 (out of 50) on Zetec models and around 15 on most models, although the luxurious Vignale with a diesel engine occupies group 23.

Ford has the largest network of dealers and authorised workshops of any manufacturer in the UK, which is one of the reasons its cars are so popular. It also means that routine maintenance should be convenient, with a workshop in most big towns. Annual servicing is required, or every 12,500 miles if the latter occurs first.

Your Ford dealer can arrange a service contract that takes your annual mileage into account, and this can make it easier to manage running costs. Consumable parts such as tyres and brake components are all readily available, which helps keep costs down – even the biggest 18-inch tyres are of a size and specification that's also used by many rival cars.

Every Ford sold in the UK has a three-year/60,000-mile warranty, which can be extended to four or five years at extra cost. A year's roadside assistance is included, too, but this warranty package is now badly overshadowed by those from Toyota, Hyundai and Kia – seven years or 100,000 miles in the case of the latter.