Ford Ka has a reasonable boot and useful storage cubbies

While space inside the Ford Ka isn’t the worst in class, it’s not class-leading either, and the car does without helpful touches such as the false boot floor you get in the Skoda Citigo.

Despite its small size, the Ka is quite tall, so it feels spacious in the front, with lots of headroom. It’s a different story for rear-seat passengers, who’ll need to squeeze past the front seats to get inside. Once they’re seated, space isn’t up to the standards of the best in class, with reasonable headroom but limited legroom.

Ford never offered the Ka with five doors, so if you regularly carry more than two people, the five-door Hyundai i10 or Skoda Citigo (which is available with three or five doors) are much better bets. The replacement Ford Ka+ is also far more practical, but with five doors and a 270-litre boot, it actually sits between city cars and supermini rivals. Even if you ignore the added practicality of the rear doors, the Skoda and the Hyundai offer more room in the back, and an adult should be able to get comfortable even if they’re sitting behind another adult. 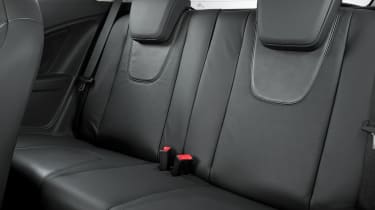 Ford has fitted plenty of useful storage spaces around the Ka’s interior, including a large glovebox, door pockets and a slot to hold your phone or MP3 player. The only cup-holder is shallow and placed low down behind the gearlever, so you could end up with coffee on your legs if you’re not careful.

The Ka has a 224-litre boot; smaller than the Citigo and i10 which can hold 251 and 252 litres of luggage respectively. Although the Ka’s boot has a wide-opening hatchback, it’s hampered by a high load lip that you’ll have to lift heavy luggage over.

Drop the seats down and the Ka’s luggage capacity increases to 747 litres, but unlike in the Skoda Citigo, there’s no false floor that can be used to make the load area completely flat. All versions of the Ka came with a puncture repair kit as standard, but could have an optional steel spare wheel for £100 extra – and we’d recommend this for added peace of mind.