Ford Ka is fun on country roads and agile in town, but struggles on the motorway

While the Ford Ka is still fun to drive, the Skoda Citigo is arguably even better. Its thrummy three-cylinder engine never feels as strained as the Ford’s, while its gearchange, steering and suspension are all a match for the Ford’s set-up. The Skoda is also slightly smaller than the Ford, making it even better suited to darting through heavy traffic.

As we mentioned already, there’s a 1.2-litre petrol with 68bhp, which accelerates the car from 0-62mph in 13.4 seconds and tops out 99mph. It’s well suited to town driving and most country roads, but it becomes noisy at speed and feels out of its depth on the motorway. You only need to look at the Fiat 500 to see what the Ford missed out on. Its hi-tech 0.9-litre TwinAir petrol engine is much smaller than the Ford’s, but produces 105bhp, which is enough to take the Fiat from 0-62mph in a nippy 10 seconds.

The original Ford Ka had a reputation as an agile hatchback that was lots of fun to drive, and some of that agility made it into the second-generation model. You sit much higher up, which doesn’t help with the sporty feel, but the Ka has plenty of grip and enough steering feel to keep keen drivers happy. Ford usually offers well judged suspension that makes its cars comfortable during day-to-day driving while also cutting out body lean, and the Ford Ka is a good example of this – although it can be a bit jiggly on bumpy roads at slower speeds. 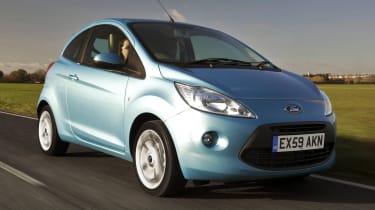 To make good progress in the Ka you need to work the standard manual gearbox hard, but it has a positive shift action that makes it enjoyable to use. It’s great fun eking out every last ounce of the Ka’s performance without even breaking the speed limit. Ford doesn’t offer the Ka with an automatic gearbox.