Ford Ka isn't as cheap to run as newer rivals

The Ford Ka is getting old now, but it's still a cheap car to run. The problem is that most rivals are even kinder to your wallet. Warranty cover was only average, too, but the Ka fights back with one of the biggest dealer networks in the country and cheap replacement parts.

Browse the specification sheets of the Ford Ka’s rivals and the areas where it needed to improve quickly become clear. While fuel economy of 57.6mpg sounds perfectly acceptable, the Hyundai i10 can return more than 65mpg and the Skoda Citigo easily manages 69mpg. 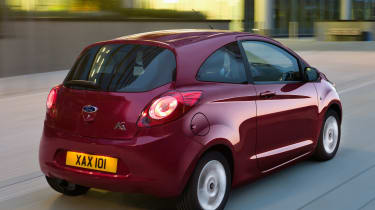 Many of the Ford’s rivals also qualify for free road tax, whereas Ka owners pay £30 a year. The Ford Ka hasn't held its value quite as well as its rivals, either, particularly in the top trim levels. In contrast, the chic and desirable Fiat 500 commands some of the strongest values on the used-car market for a model of its size.

Using the same engine across the range means all Ford Ka models occupy insurance group three – whereas the majority of Citigo and i10 models sit in group one.

Ford offers competitively priced servicing and often runs promotions, including free roadside assistance for a year when a service is carried out at one of its main dealerships. Parts for the Ka should also prove easy to get hold of and cost effective.