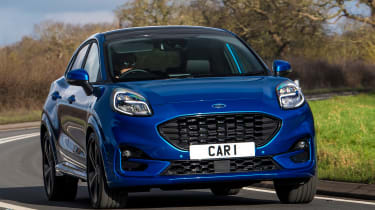 Rekindling the Puma model name for an SUV, rather than a small coupe, has been a polarising move among enthusiasts, so does the new Puma have the driver appeal to pull it off? Our early drive indicates it's certainly a contender as the most fun crossover, thanks in no small part to its stretched Fiesta underpinnings.

We've heaped praise on the Fiesta's handling, and the Puma feels agile and balanced in a way only Ford's engineers seem to manage in family cars. It's keen to change direction without feeling fidgety, and the movements of the Puma's raised bodywork are kept firmly in check. With sports suspension upgrades, the ST-Line X model we tried doesn't sit any lower, but as well as making it great fun, the stiffer settings and 18-inch alloy wheels make it fairly firm and introduce some added tyre noise.

Both of the Puma's petrol engines are 1.0-litre EcoBoost units with three cylinders and Ford's new mild-hybrid technology, producing 123 and 153bhp respectively. Acceleration is competitive for a crossover, with 0-62mph taking 9.8 seconds or 8.9 seconds with a six-speed manual gearbox.

Speccing a Puma with the seven-speed automatic gearbox increases the car’s starting price by around £1,500 or more, depending on the trim level chosen, and means 0-62mph increases to 10.2 seconds.

In ST-Line Vignale trim, the automatic gearbox feels jerky when driving at low speeds around town, with an eagerness to shift up very quickly as you move off from a standstill. In our test car, we found the automatic gearbox was easier to operate via the steering wheel-mounted paddle shifters, which helped make it far smoother to drive. At faster motorway speeds, the gearbox is far less intrusive and helps to make the Puma a reasonably relaxed long-distance cruiser.

Overall, the automatic version of the Puma is not as sharp or as involving to drive as the car with a manual. It’s also a lot more expensive to buy and slightly less efficient, making it difficult to recommend unless you absolutely need an automatic.

At the top of the range is the Ford Puma ST, which we’ve reviewed separately. It’s the most powerful model in the range by some margin with 197bhp, and is powered by the same turbocharged 1.5-litre petrol engine as the Fiesta ST. This makes it the quickest version of the Puma, managing 0-62mph in only 6.7 seconds. It has impressive poise that makes it genuinely satisfying to drive; it’s a rival not only to small fast SUVs but some of the best hot hatchbacks too. 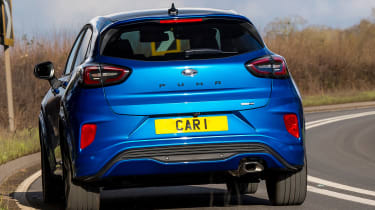