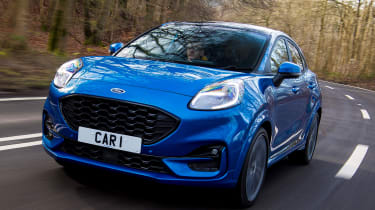 Despite the Puma’s rakish looks, there's still plenty of space for passengers and their luggage. The rear seats in the original Puma coupe were only really suitable for kids, with knee room and headroom in very short supply. In stark contrast, the latest Puma has a bigger boot than the Ford Focus that's aimed squarely at families. 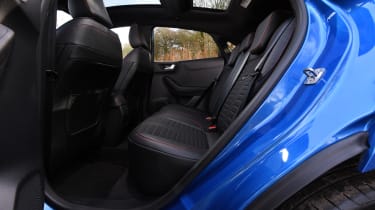 Ford's designers have pulled off a clever trick of the eye because despite the Puma's C-pillars and rear windscreen being quite heavily raked, it all happens behind the back seats, leaving passenger headroom intact. There's easily enough room for most adults, and despite sharing hardware with the Fiesta, the Puma is 54mm taller, 71mm wider and has 95mm more bodywork between the front and rear wheels.

This extra space doesn't necessarily make the Puma a class leader for flexibility though; the Renault Captur comes with a sliding rear bench and the Skoda Kamiq's boxy shape makes it feel very spacious for anyone in the back. 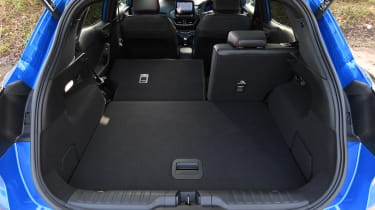 The Ford Puma's 456-litre boot is a useful size and has been well designed, with almost no loading lip. It's a square shape and its adjustable floor can be moved up and down, while hiding an 80-litre storage compartment. A removable lining that can be hosed clean should also make life easier, while a flexible parcel shelf moulds around tall and bulky items. In a first for the class, the boot on top versions can be opened with a 'kicking motion' under the rear bumper.

Ford hasn't released official towing limits for the Puma yet but a detachable tow bar is available as an option. This can be removed when not in use, helping maintain the Puma's clean lines and improving safety.