The Ford S-MAX is great to drive for an MPV, and feels like a much smaller car from behind the wheel

The Ford S-MAX has many talents on the road. Its comfortable ride and neat handling make it easy to negotiate urban streets, despite its size. It also makes for a relaxing motorway cruiser, and when the opportunity arises, it’s more entertaining than most rivals on twisty B-roads, too. 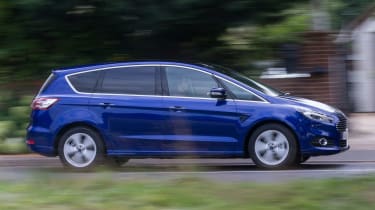 Our favourite of the engines – the 148bhp 2.0-litre EcoBlue diesel – has plenty of oomph for most people’s needs, including overtaking on the motorway. It performs adequately even when the car is fully loaded, but if you want extra punch there’s also a 187bhp version. Zero-to-62mph takes 10.8 seconds in the 148bhp models, compared to 9.5 seconds in the 187bhp models, but speccing four-wheel drive adds another second to that time. The equivalent BMW 2 Series Gran Tourer 220d xDrive is much brisker, with 0-62mph taking eight seconds.

The S-MAX is a bit softer than the car it replaces, but it's still a decent drive for an MPV. The steering feels a little vague, but body control is reasonably well controlled, although it does move around more than its predecessor. The benefit is that the S-MAX is far more comfortable than before, while engine, wind and road noise are virtually non-existent at motorway speeds. The option to fit ‘self-levelling suspension’ is available if you consistently carry heavy loads or tow a trailer. Four-wheel drive models provide extra grip, but most drivers won't notice this in everyday driving, so we wouldn’t recommend it unless you live in a particularly rural area. 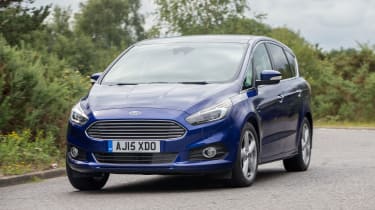 The gearshift on cars with the manual transmission has a smooth, positive action while the clutch pedal is light and progressive, making the S-MAX very easy to drive.