Fuel economy for the 2.0-litre EcoBlue diesel engines is fine, if not overly impressive, as the Ford S-MAX lags behind rivals such as the BMW 2 Series Gran Tourer and Citroen Grand C4 SpaceTourer, particularly the the diesel engine in the latter that’s capable of 58.1mpg. Resale values of the previous S-MAX weren’t particularly strong, but this model may do better. 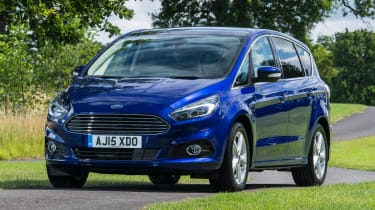 The powerful 187bhp 2.0-litre diesel can return 43.5mpg (or just 40.9mpg if you choose the four-wheel-drive model). The 187bhp engine's extra punch will appeal to frequent motorway users or those who often carry seven people and their luggage, but we’d stick with the 148bhp engine as it still offers enough pulling power.

The 148bhp diesel returns 47.1mpg fuel economy when connected to a manual gearbox, which is okay for such a bulky vehicle until you realise its rivals offer up to 10mpg more. Speccing the automatic sees fuel consumption rise to 43.5mpg, and even a petrol BMW 2 Series Gran Tourer will achieve close to this figure.

Cheaper versions of the S-MAX will cost £150 a year in road tax but the Vignale starts from over £40,000 so it’s subject to an additional £325 in tax until the car is six years old. It’s surprisingly easy to breach the £40,000 threshold on other models, too, so it pays to not pick too many options.

Business users will be best off with the 148bhp manual, as its CO2 figure of 130g/km results in the lowest Benefit-in-Kind rating in the range. It’s still high at 35% though, and includes a 4% surcharge because the engine isn’t compliant with strict new emissions laws. Some BMW and Citroen variants are compliant; the most eco-friendly Grand C4 SpaceTourer attracts a 24% rating from April 2020. 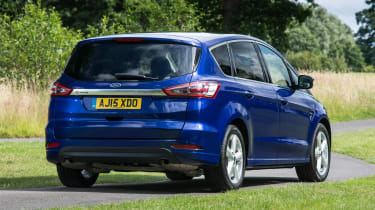 Used values weren’t very strong for the previous S-MAX, although the 148 and 187bhp 2.0-litre diesel models should claw back a decent amount of their purchase price after three years or 36,000 miles of ownership.

The Ford S-MAX comes with a warranty that covers the car for three years or 60,000 miles – whichever comes first. This is comparable to a Volkswagen or SEAT MPV, but shorter than the five years standard warranty you get with a Scenic.

Service intervals are fixed at 12,500 miles or one year and Ford offers fixed-price service plans, costing around £700 for two years (just over £400 for petrol engines) or £900 for three years (£650 for petrol). This also includes roadside assistance throughout Europe, but is quite expensive, making the S-MAX costlier to service than many SUVs.