The Jaguar XE has already proved popular with customers, scoring particularly well for how it drives, even if it's only mediocre for reliability.

The Jaguar XE was rated 71st out of the top 100 cars in our 2019 Driver Power customer satisfaction survey, with a fairly poor result for reliability, and failed to appear in our 2020 survey. Nearly a third of respondents reported one or more faults within the first year, with electrics the biggest problem area. The 2.0-litre diesel and petrol engines are not only used by the Jaguar XE, but the XF and F-Pace SUV, along with the Land Rover Discovery Sport. 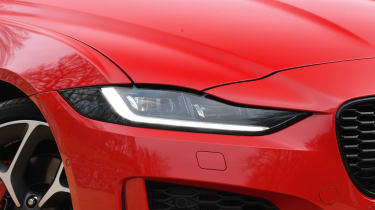 Automatic emergency braking is fitted to all models. This system can apply the brakes to either avoid or reduce the severity of a crash. There's also a lane-departure warning system that alerts you if you drift out of lane, as well as a traffic-sign recognition system that displays the speed limit on the dashboard.

Safety technology can also include blind spot warnings, Forward Vehicle Guidance (a visual aid to assist with parking maneuvers) and Forward Traffic Detection, which alerts you to approaching traffic if you are pulling out of a gap with limited visibility.

Rear parking sensors are standard across the range, but you have to pay extra for front sensors or a rear parking camera. Other options include blind-spot monitoring and a space-saver spare wheel in lieu of a tyre-inflation device.