Practicality isn’t the strongest suit of the Jaguar XE, but most people should find it easy enough to live with

Few models in the compact executive saloon class offer huge amounts of boot space or practicality and the Jaguar XE is pretty much bang on the class average in this respect.

There's plenty of space in the front, but rather less in the rear. A wide tunnel runs along the floor limiting the room available for the middle rear passenger to put their feet, while the boot, too, is constricted in volume by its shape.

There's plenty of space in the front of the Jaguar XE and the extremely comfortable seats offer plenty of adjustment. However, shorter drivers will need to increase the height of the seat because the windscreen pillars are quite thick, particularly at the base. That can cause sizeable blind spots, making pulling out of junctions tricky. 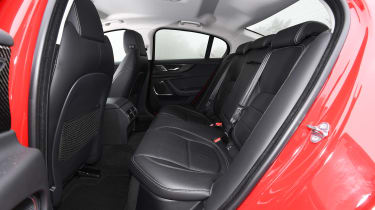 It's not quite so accommodating for rear-seat passengers. There's a large hump in the floor that robs the middle-seat occupant of foot space, while restricted headroom means that taller passengers may need to slouch a bit and slide their feet under the front seat in order to sit comfortably.

There's a reasonable amount of storage space inside the car. Each door has a reasonably sized pocket and there's a pair of cup-holders in the wide centre console. There's also a large storage box between the seats, the lid of which doubles as an armrest.

The rear door openings are quite small, which could make fitting a child seat awkward, but the doors themselves are quite long. That makes it harder to open the rear doors fully in a cramped car park.

The Jaguar XE's boot measures 410 litres but we'd still recommend the optional space-saver spare wheel in lieu of tyre inflation foam, because we prefer to have a spare in the event of a puncture. While the boot is smaller than the 480 litres you'll find in the BMW 3 Series and Mercedes C-Class and is quite narrow due to the boot hinges, it is fairly deep. It's also long enough to accommodate a set of golf clubs.

There isn't too much of a boot lip to lift luggage over and the rear seats are fixed as standard. Pay around £400 extra and all three seats fold individually, meaning you can carry long luggage, such as skis, while still accommodating two rear passengers. Or you can fold the middle seat down to make an armrest. This folding centre rear seat is a first for a Jaguar. 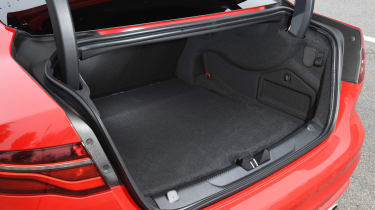 The Jaguar XE can tow a braked trailer weighing up to 1,800kg, which is enough to haul a large caravan. The various options for tow bars aren’t cheap though – an electrically deployable tow bar is a pricey optional extra.