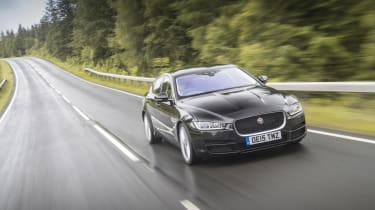 For a long time, the go-to country for the best compact executive saloons on the market was Germany. Whether it's the sporty BMW 3 Series, upmarket Mercedes C-Class or Teutonic Audi A4, this trio has been well ahead of rivals, largely from Japan. However, the British-built Jaguar XE really takes the fight to this German trio.

Low emissions from the diesel models make it a great company car, while fine handling and excellent comfort are appealing to all buyers. And now that the first examples are finding their way on to the used market, it's time to find out what potential pitfalls there are for second-hand XE buyers.

The all-new Jaguar XE was unveiled at the end of 2014, five years after its predecessor, the Jaguar X-Type, was dropped from the range, and it arrived in showrooms in 2015. While the X-Type was a mish-mash of parts sourced from various divisions of then-owner Ford, the XE used a new platform and engines to give it a fighting chance against its German rivals.

The chassis and suspension features aluminium in its construction to help save weight, while detail touches such as having the battery in the boot and a similar steering set-up as the F-Type sports car are designed to give the XE sharp handling for a fun drive.

While the X-Type was hampered by its engine and transmission choices, Jaguar got the formula right for the XE straight off the bat, with launch models featuring rear-wheel drive and a choice of six-speed manual or eight-speed automatic gearboxes.

Jag's latest Ingenium engine range debuted in the XE, comprising an efficient 2.0-litre diesel – essential for the all-important fleet market – and a sporty turbocharged petrol, also in two power outputs. At the top of the range, the fastest model in the launch line-up was the XE S, which featured the supercharged 3.0-litre V6 petrol from the F-Type.

Four-wheel drive was added to the range towards the end of 2015 to give the XE an alternative to Audi's quattro and BMW's xDrive transmissions.

Which is the best Jaguar XE model for me?

There's only one body style available for the XE, so if you want something more practical than a four-door saloon, your only other option in the Jaguar range is the F-Pace crossover. Still, the XE is competitive with rivals such as the BMW 3 Series for passenger and boot space.

As a result, it features an efficient 2.0-litre Ingenium diesel engine that's available with 161 or 178bhp. The former has CO2 emissions of 99g/km in lower-spec trim with smaller wheels and the six-speed manual gearbox, so it's currently exempt from road tax. That rises to 104g/km if you add the eight-speed automatic, which is only 5g/km ahead of the more powerful diesel. The 178bhp diesel has the same emissions whether you choose the manual or automatic, while its 0-62mph time of 7.7 seconds is seven tenths ahead of the less powerful diesel's. 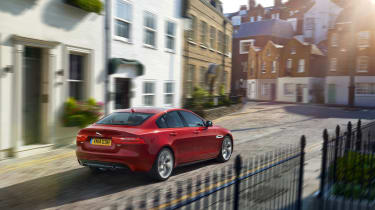 As you'd expect, the petrol models aren't as tax-friendly as their diesel counterparts. Both versions have CO2 emissions of 179g/km, while the 197bhp car manages 0-62mph in 7.7 seconds and the 237bhp model manages it in 6.8 seconds. The big difference between these two is that the former has a six-speed manual, while the more powerful car has an eight-speed automatic.

At the top of the launch range, the XE S features the same 3.0-litre supercharged V6 as the mid-range F-Type sports car. It has a healthy 335bhp and can sprint from 0-62mph in 5.1 seconds, while stop-start helps the car to achieve CO2 emissions of 194g/km.

It, too, has the eight-speed automatic gearbox, although it doesn't shout about its performance with a wild bodykit, so it's quite an understated performance car. There are rumours that Jaguar will produce an even faster XE to rival the BMW M3 and Mercedes C63 AMG, but nothing has been officially confirmed.

The basic 2.0-litre diesel will be the cheapest Jaguar XE to insure. It sits in group 22, while the more powerful diesel starts at group 25. The petrol cars rank higher, in group 24 and 29, while the supercharged V6 S is up in group 35.

Claimed economy of 75mpg for the entry-level diesel is impressive, and better than any of the XE's German rivals. In addition, 99g/km CO2 emissions mean road tax is free for all models with this engine. The more powerful diesel returns 67.3mpg, which is still pretty good. The 2.0-litre petrol manages 37.7mpg in either power output, while the supercharged 3.0-litre S returns 34.9mpg.

Jaguar offered a five-year fixed-cost service plan with the XE diesel, so any used cars that come with it will have the meat of the cover still valid. If you're looking at a pre-registered XE or an ex-demonstrator, you can still take out the service plan within 90 days of the car being registered. Prices start from £475, while intervals for the diesel are 21,000 miles/24 months, the 2.0-litre petrol is 10,000 miles/12 months and the V6 petrol is 16,000 miles/12 months.

The Jaguar XE is an all-new model, but it's the first in a line of cars that will use the same mechanical running gear and engines, so it has been exhaustively tested to ensure that it's reliable. It's too early to say how successful the development has been, because any faults will be covered by the car's standard three-year warranty.

Our sister title Auto Express ran a 2.0-litre diesel XE for a year without any serious problems. One niggle was that the digital fuel gauge would never display a completely full fuel tank, even after being brimmed, but that's not a sign of anything serious.

In the past, it hasn't been uncommon for Jaguar and sister firm Land Rover to call owners back in with their cars to issue a software update to ensure they're running correctly. This work has always been carried out under warranty, so it's just the inconvenience of visiting a dealer that will be off-putting for some.

It's only been on sale since 2015, but there have already been two recalls on the XE. The first was issued in March 2016 and related to cars powered by the Ingenium diesel engine. There was a potential issue with the low pressure fuel feed hose detaching from the fuel filter, which could cause the engine to cut out.

Once that has happened, the brake reservoir could be depleted after two or three pedal presses, resulting in no servo assistance. Cars affected were built between November 2014 and February 2016, which accounts for a majority of the XE's initial production run.

The second recall was issued in May 2016. It affected right-hand-drive vehicles, where the driver's seatbelt pre-tensioner may not deploy as intended due to an incorrect connection. Models affected were built from the end of September 2015 to March 2016.

The obvious alternatives to the Jaguar XE are its main German rivals, all of which have their own selling points.

The BMW 3 Series is clearly the XE's most immediate rival, as it matches it for engine performance and cabin space and handles marginally better than the Jaguar. Fuel economy isn't quite as good, while Jag's fixed-price service plan takes its inspiration directly from BMW's 'ServiceInclusive' scheme.

The Mercedes C-Class is like a shrunken Mercedes S-Class limousine, so it has a more upmarket-feeling cabin than the XE, especially if you go for the higher-spec AMG Line trim. There's plenty of advanced technology on board, but the diesels are noisy and not quite as economical.

Then there's the Audi A4. Like the other two, it's not as efficient as the XE, but it has a modern layout inside, plenty of space and great cruising ability. Quattro four-wheel drive used to be a selling point, but it's matched by the Jaguar and BMW for total traction.

Beyond this trio, there's the Lexus IS, which is offered with turbocharged petrol or hybrid power. The latter is good around town, but economy isn't as good as a diesel on longer trips, while the former isn't really a sporty alternative to the XE. Elsewhere, the Volvo S60 is getting on now, and while its diesel engines are efficient, it's not as roomy, refined or good to drive as the XE.

The Jaguar XE is the right car at the right time for Jaguar, as it takes on the best in the compact executive saloon sector and beats them at their own game. Its combination of involving driving dynamics, efficient yet powerful engines and a classy cabin mean it has a real feel-good factor, and this combination of talents continues to shine through as a second-hand buy. 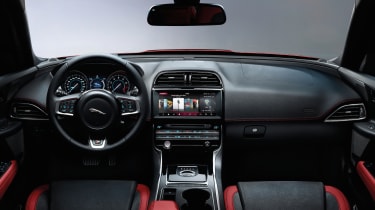 If you're buying second-hand, then the best option is an ex-demonstrator from a Jaguar main dealer, as this will have been kept up-to-date with software patches and any other mechanical revisions, and therefore will have the teething troubles of the first batch of cars off the production line ironed out of it. Diesel is the way to go if you're planning on doing big mileage, but low-mileage users will be just as happy with the 2.0-litre turbo petrol model.