"The Jaguar XE S is about as hot as the saloon will get until Jaguar hand it over to their Special Vehicle Operations performance division." 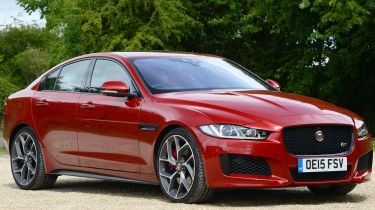 The Jaguar XE S is a compact executive saloon that is a range topper for Jaguar's all new saloon car. Until Jaguar and Land Rover's Special Vehicle Operations (SVO) unit do a proper performance model of the XE, the S is about as close as you'll get.

It has the 3.0-litre V6 petrol engine from the gorgeous Jaguar F-Type crammed in, which produces 335bhp and a 0-62mph time of just 5.1 seconds. Performance feels brisk and swift instead of lightening fast, as the speed tends to swell and grow rather than hit you all in one go. The V6 is connected to Jaguar's slick eight-speed ZF automatic gearbox, which has paddles on the steering column if you want to change gears yourself. There's loads of grip, thanks to Jaguar's Torque Vectoring traction control system, and the XE has the right balance between comfort and a sporty driving style.

The XE S has its own sports bodykit and has loads of bonus luxuries that even go beyond Carbuyer's standardised equipment list. Additional features include keyless start and entry, a 380 watt Meridian sound system, bi-xenon headlights, Jaguar's Adaptive Dynamics system and a powered tailgate. That list stretches to heated leather sports seats, automatic climate control, sports suspension and sat nav too.

The interior is plush and well made, and the S gets its own set of specific details inside and out. In fact, the XE's interior in general is a very luxurious place to be in, while the InCommand and InControl systems means it keeps up to date with the latest technologies.

The XE is a very pretty car to look at and the bodykit that's been applied to the S model does nothing but make it sharper and more aggressive on the road. It's a compact executive saloon for those who really want to stand out.XE S buyers will want for nothing - the enormous list of standard equipment definitely seals the S as the top-spec Jaguar XE.The combination of the F-Type's V6 engine and a taut, crisp driving style means the Jaguar XE S is a very exciting car to drive. So much so that we think the XE is a serious contender for the handling crown in this sector. The suspension is so well damped that cruising is very comfortable too.

Despite the rest of the range offering very economical diesel engines from Jaguar-Land Rover's Ingenium range, the performance-orientated nature of the 3.0-litre V6 in the S isn't that fuel efficient.At almost £45,000, the XE S is very expensive. It's almost £4,000 more than an top-spec Audi S4 and around £6,500 more expensive than a top-of-the-range BMW 3 Series.More a general point of the XE - the boot is a little small and the huge transmission tunnel doesn't spell well for the unlucky third rear passenger in terms of legroom.

There's only one and it has the 3.0-litre V6 petrol from the Jaguar F-Type. Performance is sprightly from the 335bhp on offer: 0-62mph is dealt with in 5.1 seconds and it has an electronically limited top speed of 155mph. 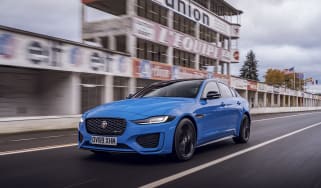