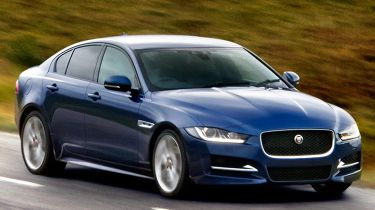 In R-Sport trim, the Jaguar XE saloon is treated to a suite of subtle design changes to make it look more sporty, but the economical engines remain.

The R-Sport trim is available with the largest choice of engines in the XE range. The best seller will undoubtedly be the 161bhp 2.0-litre diesel, as it has an impressive fuel economy figure of 68.9mpg. The more powerful 177bhp version performs almost as well, so it'll be our choice. There's also two petrol engines on offer: a 197bhp and a 236bhp version of a 2.0-litre petrol. The slick eight-speed automatic will take all the stress out of stop/start traffic and will particularly appeal to company car buyers.

Due to the R-Sport's racier design and placement at the higher end of the trim gradings, it will rival the likes of the BMW 3 Series M Sport, the Audi A4 S line Nav and the Mercedes C-Class AMG Line. Just like the XE R-Sport, these cars all take inspiration from their respective performance divisions to provide a sportier look and drive. Unlike the Jaguar XE S, the R-Sport trim is more competitively priced against these rivals.

The XE is a very composed car to drive, coming close to the BMW 3 Series M Sport for driving dynamics. In fact, we think it could be a real contender as the driving enthusiast's choice.The diesel engines are very economical, with the meatier 177bhp version only returning around 2mpg less than the most economical 160bhp model. The automatic gearbox is incredibly smooth too.THe XE R-Sport's price range is about the same as the Audi A4 S line Nav, while the cheapest version is around £1,500 cheaper than a Mercedes C-Class AMG Line.

Although its prices are largely in line with its rivals, the most economical version isn't the cheapest to buy. In fact, the cheapest model in the range is the least economical, so it's a compromised choice.The XE isn't the most practical car, as the central transmission tunnel takes away a lot of space for the third rear passenger. The boot isn't quite as large either.

To fit the R-Sport's more entertaining character, we'd go for the punchier 177bhp 2.0-litre diesel, instead of the smaller 160bhp model. It may not be tax free, but it's still capable of up to 67.3mpg and its carbon dioxide emissions of 109g/km means your annual tax bill is only £20 per year.