Running costs are everything in the executive-car class these days. With company cars making up many of Jaguar’s yearly sales, drivers are looking to minimise their Benefit-in-Kind tax bill, so manufacturers are competing fiercely to get their contenders' CO2 emissions as low as possible. Jaguar has done an impressive job with the XF – the most efficient version emits a reasonable 146g/km.

The entry-level Jaguar XF is the 161bhp 2.0-litre diesel version that emits between 147 to 161g/km of CO2 depending on specification, with claimed fuel economy of up to 50.4mpg. This engine, also available in 178bhp form, is RDE2-compliant and will not be subject to the 4% BiK diesel surcharge. Very few diesel cars are RDE2-compliant and company-car users will welcome lower BiK ratings on these models. 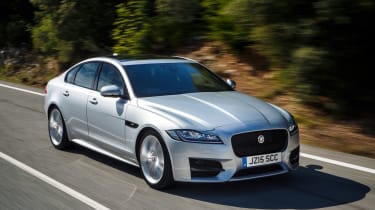 As you might expect, the 3.0-litre diesel engine in the high-performance XF S and luxury Portfolio models are not as efficient as the ‘Ingenium’ 2.0-litre diesels. The 3.0-litre engine returns 40.8-43.9mpg and emits 169-182g/km depending on specification, putting it in the highest BiK rate banding.

For those who want a petrol powered XF, there’s a choice of two turbocharged 2.0-litre petrol engines to choose from. The 25t version produces 246bhp producing CO2 emissions of 186-203g/km. This entry-level is the most efficient model, producing fuel economy of up to 31.5-34.4mpg. The more powerful 30t petrol engine produces 296bhp, and fuel economy of 29.9-32.6mpg and CO2 emissions of 196-214g/km.

After the first year's CO2-based road tax (generally included in the on-the-road price), all Jaguar XFs cost £150 a year to tax. Those with a list price (including options) of more than £40,000 are liable for an additional surcharge of £325 a year in years two to six, bringing the annual bill to £475 during that period.

All new Jaguar XFs sold in the UK come with three years' unlimited-mileage manufacturer warranty cover. After three years, this can be extended for an extra 12 months at a time at additional cost.