Today’s Jaguars have become renowned for their sleek, stylish and hi-tech interiors and things are no different in the latest XF. The design of the interior will be familiar to anyone who’s sat in the smaller Jaguar XE or larger Jaguar XJ saloons and material quality is very good – although we think the Audi A6 still feels a fraction more solid in this respect.

Fans of the original XF’s cabin will be happy to learn that its ‘party pieces’ – a rising rotary gear selector knob and rotating air vents – are both present and correct in the latest version. Meanwhile every XF comes with a 10-inch Touch Pro touchscreen infotainment system as standard with full personalisation features and smartphone connectivity. We like it, but it’s still not as intuitive to use as the class leader in this area – the BMW iDrive system.

However, it does pack a range of clever features, including the ability to pay for fuel at Shell stations wirelessly, without having to leave the car and go to the till. 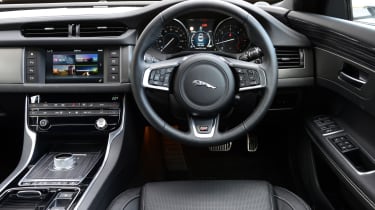 Every Jaguar XF, including the entry-level Prestige spec, sits on 17-inch alloy wheels and has an interior trimmed in leather, including the steering wheel. There’s also an infotainment system with an eight-inch colour touchscreen incorporating sat nav, on-board wi-fi, iPod and Bluetooth phone connectivity and DAB radio. Apple CarPlay and Android Auto are standard on all trim levels. All models also come equipped with dual-zone climate control, keyless start and cruise control.

Moving up to R-Sport adds 18-inch alloys on all models apart from the 161bhp diesel, a sporty bodykit that mimics the look of the XF S, sports suspension, supportive sports seats and prominent ‘R Sport’ branding. 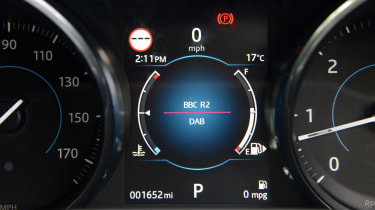 A special Chequered Flag model celebrates Jaguar’s history in motorsport, adding extra equipment and a few styling changes. Black 18-inch alloy wheels, boot spoiler and styling pack are complemented by a choice of three metallic paint colours, which are included in the car’s price. Inside, this model has R-Sport leather seats in black or dark red.

Heading the range is the XF S version. It’s distinguished by even larger 19-inch alloys, a bodykit and brake calipers finished in red. All this comes in addition to the luxury features of the Portfolio, as well as the sports suspension of the R-Sport and is only available with the most powerful 3.0-litre diesel engine.

Every XF boasts a full suite of advanced safety kit, including hill-start assistance, emergency braking assistance and traffic-sign recognition, while the lane-departure warning system provides strong and reassuring feedback through the steering wheel if it senses you’re drifting out of your lane without indicating.

The XF’s infotainment display doesn’t look as appealing as some manufacturers’ offerings, but it’s pretty quick in its operation and generally works well – although we found some of the buttons and icons to be a little on the small side. The sat nav is slow to get going if it’s been some time since you started the car, but the Google-based mapping means guidance is accurate and quick, even if the system gives too many voice commands as you drive along your route.

The InControl Touch Pro Pack upgrades the conventional dashboard dials with a configurable 12.3-inch colour screen. Like that in the Audi TT and other cars from the VW Group, it can be configured to show navigation information alongside the usual speed and engine information. You can also add a laser head-up display and a Memory Pack with power-adjustable seats and power-folding mirrors.

Other options on the entry-level XF Prestige include a Parking Pack, which adds front parking sensors and a rear parking camera. Alternatively you can specify an Advanced Parking Assistance Pack with front and rear sensors and 360-degree camera coverage. The XF's self-parking system was highly commended at the 2016 Car Tech Awards, with the Jag only losing out to the system available with the Mercedes C-Class. Judges praised it for being so simple to use, as well as liking its speed of operation and the 360-degree camera system.

The Active Safety Pack includes a lane-keeping aid that will steer the car back in its lane should you begin to drift, while the Cold Climate Pack adds heating for the front and rear seats, the windscreen washer jets and the steering wheel. The Power Convenience Pack gives you keyless entry, a powered bootlid and additional power sockets in the cabin.

All these option packs are also available on the Portfolio, R Sport and XF S. The latter two can be chosen with a Black Pack, which adds a gloss-black trim finish to areas including the grille, bootlid and air vents. The XF S can also be specified with a Rear Comfort Pack (including sunblinds and four-zone climate control) and 14-way adjustable seats.