Kia has increased both the overall length of the Sportage and the length of its wheelbase – the distance between the front and rear wheels. This has served to expand both boot space and the rear passenger room.

Whichever Sportage model you go for, you’ll have plenty of space, whether you’re sitting in the front or the back. This is largely thanks to that longer wheelbase, but the car’s total length has been increased as well, making it even more spacious. 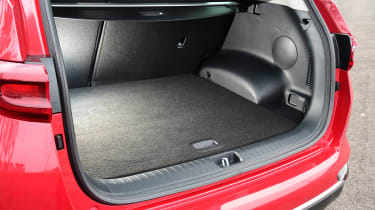 There’s plenty of storage space, with two cup-holders in the centre console and a spacious cubby under the armrest. The space available in the door bins isn’t particularly impressive, however. The glovebox is a good size, though. There’s no option for seven seats in the Sportage – you’ll have to upgrade to the Kia Sorento if you have more than five people to carry.

In total, there’s 491 litres of luggage space on offer, or 439 litres in the mild-hybrid model. While this isn't exactly exceptional, is still more than you get in the Renault Kadjar or Nissan Qashqai. Fold all the rear seats down and the available storage expands to between 1,428 and 1,480 litres, which is a little less than you’ll get in many of its rivals, but should still be plenty.

Although there’s still a bit of a boot lip, it’s a lot less pronounced than it was in the previous model – and much lower than the likes of the Renault Kadjar – so the Sportage’s boot is now more usable than before. You also get tie-down points in the boot and you can store the parcel shelf under the boot floor.

The battery pack that supports the 2.0-litre diesel's 48v mild-hybrid system takes up a little space and the standard space-saver spare wheel is replaced with a puncture repair kit.

The Kia Sportage is a competent tow car, with the entry-level 130bhp petrol engine capable of hauling up to 1,400kg. Step up to the more powerful 174bhp petrol engine with a six-speed manual gearbox, and both the front- and four-wheel drive versions can tow up to 1,900kg. Speccing the automatic gearbox reduces this figure to 1,600kg.Opt for the 134bhp diesel engine and six-speed manual gearbox, and the maximum trailer weight falls short of the petrol models at 1,400kg. Speccing the seven-speed automatic gearbox in either front- or four-wheel drive increases the towing capacity of the Sportage to 1,600kg.