The Kia Sportage offers a good balance between fun and comfort

As a reasonably tall crossover SUV, the Sportage is never going to be the most entertaining car in the world to drive, but compared to its rivals, it’s perfectly competent. 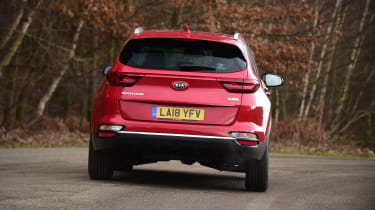 Most versions ride nicely and the steering is positive and direct, while there’s plenty of grip, too. The manual gearbox in our test car was a sweet-shifting thing and body lean is well controlled in the corners. Most of the time, the car is front-wheel drive, but it can send up to 40% of its power to the rear wheels, if it detects the front is losing grip.

However, it’s still very much a comfort-orientated driving experience and not quite as sharp as rivals such as the Mazda CX-5, Ford Kuga and SEAT Ateca, it beats all three for ride smoothness – motorway surface imperfections and urban potholes are absorbed effectively and few shocks are transmitted to passengers. The large wheels and extra weight of the mild-hybrid technology in the range-topper detracts from this, however, making the ride somewhat bouncier.

The flagship Sportage diesel engine is a clever one; it's a 1.6-litre turbodiesel that uses a 48v power supply to provide electrical assistance when acceleration. This setup is known as a 'mild hybrid' and aims to reduce engine workload and consequently improve fuel economy and lower emissions. It works, too.

An electric motor forms part of a 'starter generator' unit which allows engine stop-start to function over a much broader speed range, cutting the engine from around 10mph when you're pulling up to a halt and then restarting as soon as power is required. It's inobtrusive in action, too.

The front-wheel-drive version is quickest when equipped with a six-speed manual gearbox, managing 0-62mph in 10.8 seconds. Speccing the seven-speed automatic gearbox increases the 0-62mph time to 11.4 seconds, with the four-wheel-drive model taking 11.6 seconds. Every diesel Sportage is capable of a top speed of 112mph.

The pulling power of the diesel engine means it offers flexible performance, giving you the ability to overtake while at most points in the rev range. At motorway speeds, the engine is quiet and feels relaxed, making the Sportage an easygoing cruiser.

Even though the petrol models are unlikely to be as popular as the diesel versions, they’re worth considering if you don’t do a huge number of miles. The 174bhp turbocharged 1.6-litre petrol engine is impressively smooth and quiet, but unfortunately, despite what the figures suggest, it doesn’t actually feel all that quick.

When fitted with the seven-speed dual-clutch automatic gearbox and four-wheel drive, it's the quickest model in the range. It’ll do 0-62mph in 8.8 seconds and go on to a top speed of 125mph. When equipped with front-wheel drive and a six-speed manual gearbox, 0-62mph takes 8.9 seconds, with the automatic taking 9.2 seconds.

There’s one other petrol engine and that too displaces 1.6 litres, but doesn’t come with a turbocharger. It produces 130bhp, does 0-60mph in 11.1 seconds and has a top speed of 113mph.