The Range Rover Sport is fast and handles well, but it’s still a big, heavy 4x4

The latest Range Rover Sport has made big leaps forward in driver enjoyment over the first generation. This is thanks in part to its lighter construction, which makes increased use of aluminium. The weight loss has led to a greater feeling of stability in corners than its predecessor.

As well as a commendably light weight for such a big car, the Range Rover Sport has a cleverly designed chassis. There’s an anti-roll system to keep the car level through corners and it works very effectively – while big SUVs usually lean quite markedly in bends, the Sport does it a lot less than you might expect.

There's no getting away from the fact that this is still a big, heavy SUV; you have to brake quite heavily to scrub off speed into corners and roundabouts, and in this respect it doesn’t wash off speed quite so effectively as a Porsche Cayenne Coupe. The steering feels quite precise and although it might seem a little too light, it probably wouldn’t instil as much confidence if it was heavier. As it is, you don’t feel that you have to wrestle the car through corners. 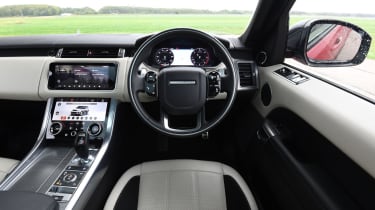 Step up to the SVR and there's an immediate difference – and not just from the massive increase in power. Tweaks to the suspension mean the SVR doesn't point its nose in the air under heavy acceleration, nor does it dive when the brakes are applied hard. Its stiffened setup means even less body lean in corners, too, as well as a greater sense of confidence that this big, heavy SUV will go exactly where you point it.

Land Rover is proud of the off-road credentials of its cars and no Sport is an exception. Away from the tarmac, it still has the advantage over its Audi Q7, BMW X6, Porsche Cayenne and Volvo XC90 rivals – with its huge range of driver-assistance modes, it’s every bit as capable as its larger Range Rover stablemate.

The flagship of the Range Rover Sport range is the SVR, which uses a supercharged 5.0-litre V8 tuned to a formidable 567bhp. This is enough to thrust the car from 0-62mph in just 4.5 seconds, emitting a thunderous roar as it does so. It's remarkably responsive – the supercharger is always on call, with none of the delay that plagues some turbocharged cars, and it emits an appealing whine when full power is demanded. Given somewhere safe and legal to do so, you can take the SVR to an incredible top speed of 176mph.

Rather less dramatic – and rather more affordable – the 2.0-litre is turbocharged and its 296bhp is still enough for a 7.3 second 0-62mph time. However, the nature of the engine is quite high-revving – it feels like it might be more suited to a sports car than a big, heavy SUV.

Taking account of its relative thirst, we can’t recommend the 2.0-litre over the similarly quick 3.0-litre SDV6 diesel – even though the latter is a little more expensive to buy.

Sitting in the middle of the Range Rover Sport range, the P400 uses a turbocharged 3.0-litre straight-six petrol engine and a 48-volt mild hybrid system for a total power output of 395bhp. The added power from the mild-hybrid assistance means it's capable of 0-62mph in 5.9 seconds and a top speed of 140mph, making it significantly faster than both the P400e plug-in hybrid petrol, and the V6 and V8 diesel models.

There are two diesel engines on offer. The 3.0-litre V6 produces 298bhp and can take the Sport from 0-62mph in 7.1 seconds. Next up is the considerably costlier but more powerful 4.4-litre 334bhp SDV8 diesel, which manages 0-62mph in 7.2. It isn't any faster then, but it is smoother and quieter than the V6 diesel.

If you don't want to sacrifice performance but want your Range Rover Sport to be as economical as possible, while also keeping down the cost of BiK company-car tax liability, there's the P400e. This uses a 2.0-litre turbocharged petrol engine with 296bhp and an electric motor for a combined 398bhp. When its plug-in battery pack is fully charged from a home supply or public charger, up to 31 miles of electric driving is possible. It's quick too, taking 6.7 seconds to hit 62mph from a standstill.