The Range Rover Sport SVR offers enormous performance from it's huge 5.0-litre petrol engine. Unsurprisingly it has a vast price tag to match. 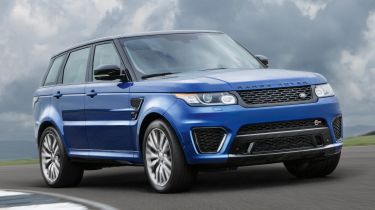 With 542bhp on tap, one thing the Range Rover Sport SVR isn't is slow. It'll cover 0-62mph in 4.5 seconds – quick enough to embarrass plenty of sports cars. Should you be on a private track or the German Autobahn, you can travel at a top speed of 162mph as well.

But the Range Rover Sport SVR is still a big 4x4, so what's really surprising is that it's more than capable of driving like a sports car. It recorded the fastest lap time ever for an SUV around the 12.9 mile Nurburgring race track in Germany. But perhaps best of all is the fact that it's retained much of the standard car's off-road credentials – although those low-profile tyres might not be quite as capable in mud and ruts as the bigger tyres found on standard models.

It features all of the equipment befitting a top-of-the-range Range Rover Sport model, including an SVR bodykit, powerful Brembo brakes, plush leather seats with electric adjustment and heating function and huge 21-inch wheels. But what justifies its near-£100,000 price tag is that brutal engine under the bonnet and the performance it provides.

The SVR is defined by its explosive performance – a 4.5-second 0-62mph time is pretty much unheard of in such a big car. But despite this, it has the technical wizardry to back this up, as that incredible Nurburgring laptime proves.Yes, the Range Rover Sport SVR is expensive, but it also provides all the equipment you could reasonably ask for in such a car.

Collosal thirst. Land Rover says the SVR will return 22mpg on average, but should you exploit that available performance, you can expect that to tumble into single figures. And then there's the road tax which, thanks to CO2 emissions of 298g/km, means it falls into the highest and most expensive road tax band.

There's only choice in the SVR – it comes with a big 5.0-litre supercharged petrol V8, which offers performance that's second to none for this kind of car.