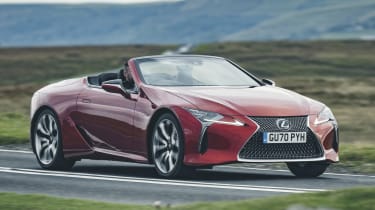 The highly anticipated Lexus LC Convertible has now joined the LC range, several years after the coupe first went on sale to bolster the image of the Lexus brand. It was a well-needed shot in the arm, proving Lexus can excite with edgy styling and take on more established rivals including Porsche. The drop-top should offer even greater thrills, allowing occupants to better hear the roar of the V8 engine.

It's a neatly styled roof, too, leaving the LC's sharp lines intact. When it's stowed - in around 15 seconds at speeds of up to 31mph - there's a rear deck that seems to make the Convertible's rear haunches look even wider. It also gains a new set of rear lights and chrome exhaust finishers nestled at either side of the rear diffuser.

With no hybrid version available, the LC Convertible only comes with Lexus' 5.0-litre V8 petrol engine, which produces 457bhp and gets the car from 0-62mph in 5.0 seconds. It's the heart and soul of the car, with a pure soundtrack that isn't stifled by any turbocharging, but it's also rather thirsty - expect around 24mpg. The LC is also too big and heavy to be a true sports car, but it's still great fun to drive and a surprisingly good long-distance cruiser.

The only fly in the ointment is storage space; if you do decide to drive the LC 500 Convertible to a warmer country, you’ll have to pack fairly light. The boot only measures 149 litres, but at least the 2+2 seating layout means there's some extra room for soft bags behind the front seats. 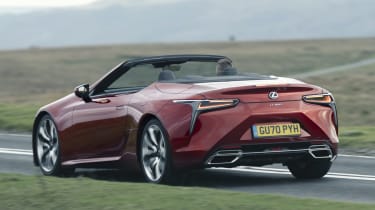 Costing around £95,000, the LC 500 Convertible occupies an interesting spot in the market. It's considerably more expensive than a Jaguar F-Type P450 but undercuts the faster Porsche 911 Carrera S Cabriolet. Meanwhile, the BMW 8 Series Cabriolet is slightly bigger but likely to appeal to the same demographic. Those after a more sporty car are likely to pick the Porsche, or even the BMW M8 Competition Convertible, but we expect the Lexus to appeal to buyers after a more laid back driving proposition.

With no hybrid option, the drop-top Lexus is only for serious enthusiasts

Unlike the Lexus LC Coupe, the Convertible isn't expected to come with a hybrid powertrain. Instead, the 5.0-litre V8 is the sole engine, so this won't be a convertible that appeals to many high-mileage drivers. 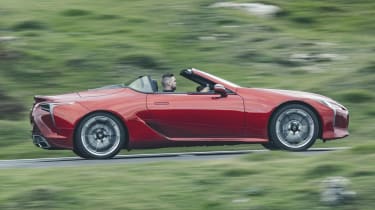 Its efficiency figures are 24.1mpg with CO2 emissions of 275g/km, putting it slightly behind the 26.5mpg of the Jaguar F-Type P450. The Lexus' fuel economy would be considerably worse, if it wasn't fitted with clever D-4S fuel injection and VVT-i valve timing, as well as running at a high compression ratio for a petrol engine. Its 10-speed automatic transmission also helps improve efficiency by providing a wide spread of gear ratios, helping keep the engine in its sweet spot more of the time.

A characterful V8 is the star attraction of this grand tourer

It's important to understand the LC 500 Convertible isn't out to topple the Porsche 911 Cabriolet; it feels like a fast but comfortable tourer on the road. It's very surefooted but doesn't goad you to attack a set of slalom bends like a lightweight sports car. Its suspension is supple and it has pleasant steering but its automatic gearbox can occasionally get caught out. 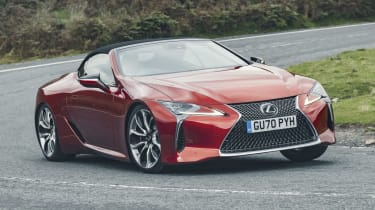 Like the coupe, the engine is also the star of the show here. If anything, Lexus has done too good a job insulating noise with the soft-top roof up, but with it down the V8 sounds fantastic. It growls at low revs, then the note hardens to a thrilling crescendo as the engine passes 4,000rpm, popping as you come off the throttle. It's an addictive sound that will have drivers reaching for the button to drop the roof. 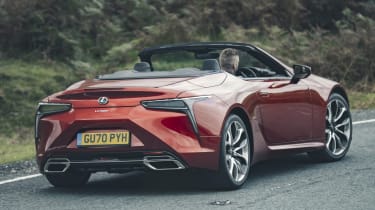 While raw numbers don't seem quite so important behind the wheel of the Lexus, its 457bhp gets the convertible from 0-62mph in 5.0 seconds. The cheaper F-Type P450 is faster, taking 4.6 seconds thanks mostly to its lighter weight, while the Porsche 911 Carrera S Cabriolet is in a different league, taking just 3.9 seconds.

The folding soft-top is an automotive work of art

Lexus has a reputation for getting the small details right, and it's clearly spared no expense on the design of the LC Convertible's soft-top. It can be operated at speeds of up to 31mph, and takes around 15 seconds to lower, but Lexus says it has been tested at up to 56mph to account for gusts of wind. It has also been put through rigorous testing, with 18,000 cycles conducted in the workshop.

Its multi-layer construction also means the interior is quiet and refined with the roof up when you just want to relax. The interior is trimmed in quality leather and there are plenty of sturdy metallic switches for those buyers still partial to some physical buttons. It's a shame the infotainment setup still uses a touchpad that's tricky to use, but it does now thankfully offer Apple CarPlay and Android Auto. 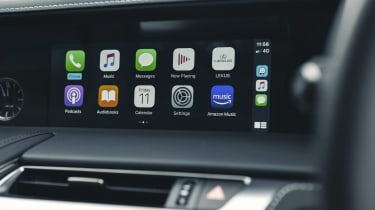 There are some neat features too, like the TFT instruments based on those first seen in the Lexus LFA supercar, with a moving central ring for added theatrics. The steering wheel features large magnesium alloy paddles for manually shifting gear, and the seats have been carefully designed to be both comfortable and highly supportive. Optional extras include a colour head-up display, 17-speaker Mark Levinson sound system and special paint finishes.

Like the Porsche 911 Cabriolet, the Lexus LC 500 Convertible is described as having a 2+2 seating layout. This means there are full-size front seats but only small back seats that are suitable for kids or a few bags of shopping. 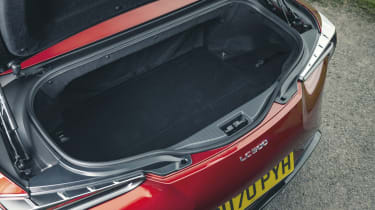 Given how good the LC 500 Convertible is to drive over longer distances, it's a shame it only has 149 litres of boot space, which is less than a MINI Convertible. This could make it tricky to take the Lexus on holiday without some smart packing in soft bags or a support car in convoy. The Porsche has front and rear boots for added versatility, while the BMW 8 Series Convertible manages 350 litres with the roof up and 280 litres with it stowed, making it quite a bit more practical.

Lexus has a stellar reputation for owner satisfaction

This is an area where Lexus really excels; the Japanese brand has topped our Driver Power survey for owner satisfaction every year since 2016. Owners find its cars impeccably built with fantastic reliability and, as its halo product, we'd expect the LC to exemplify this. The only areas it didn't perform superbly were for fuel bills and infotainment. 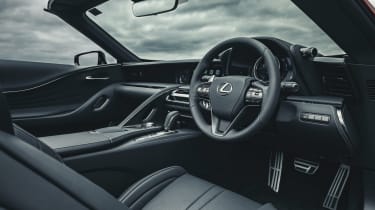 Being such a niche model, it's unlikely Euro NCAP will crash-test the LC 500 Convertible, but we doubt this will put off too many potential buyers. Lexus has a solid reputation for building safe cars and its Lexus Safety System+ is included. This brings technology such as adaptive cruise control, lane-keeping assistance and traffic-sign recognition. Pre-Collision System (PCS) can detect vehicles and pedestrians, automatically applying the brakes if there's a risk of impact.