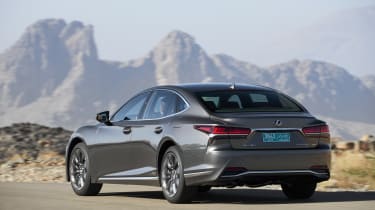 The Lexus LS 500h doesn't exactly offer an up-front incentive for buyers – the entry-level version costs some £13,000 more than the cheapest Audi A8. There's a good chance of recouping a big chunk of your investment when it comes time to sell, though, as Lexus predicts that its flagship saloon will retain an impressive 53% of its value after three years on the road.

Where the Lexus struggles to compete with rivals is in fuel economy and emissions. The lack of a diesel model will limit its appeal among those who cover really high annual mileages.

In four-wheel-drive Premier form – which Lexus predicts will be the biggest-selling version – the LS 500h is claimed to return 39.7mpg. This is a respectable figure for a car fuelled with petrol, but can't come close to an A8 diesel's 50.4mpg, although its 161g/km CO2 emissions rating means its Benefit-in-Kind (BiK) rating for company-car users is the same 31% as the Audi.

Owing to reduced weight and mechanical drag, rear-wheel-drive versions use a little less fuel, and at 147g/km their CO2 emissions mean a lower 28% BiK rating.

With a price tag comfortably above £40,000, every LS 500h will cost £440 in road tax for each of five years after its first birthday, reverting to a £130 annual charge from its sixth birthday onwards.

The Lexus won't be a cheap car to insure by any means. The previous version was listed in insurance group 50, the highest there is, and it's unlikely that the latest car will be ranked any lower. However, rival models are rated in at least group 49. It's always worth seeking an insurance quote before you make a decision to buy.

Servicing costs for the Lexus LS 500h are on the high side, a point expressed by owner comments in our Driver Power owner satisfaction survey. Service appointments are due every 10,000 miles. Fortunately, a service contract can be arranged to help spread the cost of servicing. Be aware that consumable items, such as brake components and tyres, are likely to be expensive on such a large, heavy car.

Every Lexus sold in the UK is covered by a three-year/60,000-mile warranty, although hybrid components are covered for five years/60,000 miles. This warranty doesn't seem as generous as German rivals, all of which have no mileage limit on their three-year warranties. It also seems a little mean when you consider that Toyota – Lexus' parent company – offers a five-year/100,000 mile warranty. An extended warranty can be purchased, though, and can operate until your Lexus reaches 10 years on the road.