Although the Lexus RX has plenty of rear legroom, boot space lags behind its rivals

The Lexus RX is a big car and this is never more apparent than when you’re trying to navigate city streets and narrow gaps. The elevated driving position does help to certain extent, giving you an excellent view of your surroundings. As with a lot of SUVs, the windscreen pillars hurt visibility, as they often intrude on your view when pulling out of side streets and at junctions. 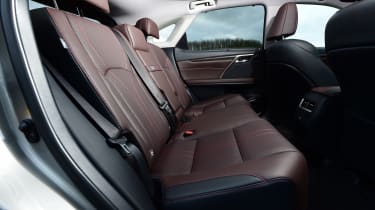 The RX’s size can be a hindrance in some respects, but it does make for a spacious interior and passengers in the back should be pretty comfortable. There’s more legroom than there was in the old RX and the comfortable, limousine-like seats will recline further back. There’s no raised floor either, so middle-seat passengers have more space for their feet. Of the car’s closest rivals, only the Range Rover Sport is significantly more comfortable for rear-seat passengers. 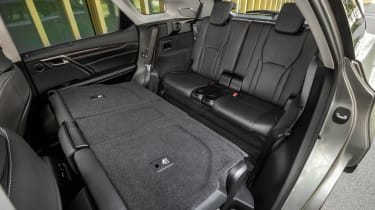 From June 2018, the Lexus RX L became available in the UK, with a stretched boot and seven seats instead of five. As well as making the RX 110mm longer, Lexus has increased the height of the roof and made the rear window more upright to boost space. Even so, it’s still more of a 5+2, like the Land Rover Discovery Sport, rather than a true seven-seater. Young children might find it comfortable, but adults are likely to feel rather cramped, even on short trips.

The RX was designed with the 450h hybrid model in mind, so the boot was designed around the presence of batteries in the rear of the car. This means both models have a smaller boot than rivals using just petrol or diesel power.

With the rear seats up, boot space is 453 litres in the five-seater. Fold down the rear seats (which don’t quite lie completely flat) and space increases to 924 litres. The height of the car means loading the boot with heavy items could be a bit awkward, but at least there's no boot lip to worry about, so once you’ve got an object lifted on to the boot’s edge you can just slide it in. 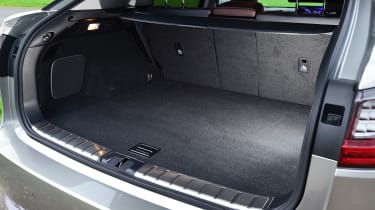 There's no getting away from the fact that it lags behind rivals in terms of the amount of space on offer, however. A Volvo XC90, for example, manages 314 litres with all seven seats in place, while with the five back seats folded down, you get a massive 1,868 litres of space - nearly twice that of the Lexus. For those in need of more space, the Lexus RX L sees space increase to 495 litres, expanding to 966 litres with all the rear seats out of use, although this is still smaller than most rivals.

60:40 split-folding rear seats are fitted as standard and can be operated electronically using one of two buttons – one in the boot and another in the cabin. These power-folding seats are a nice touch, but like the hands-free electric bootlid that comes as standard on some RX, they take quite a while to complete their action.