There’s now just one version of the Lexus RX and RX L: the 450h hybrid. Being a big, heavy SUV, fuel economy isn’t mind-blowing, although the 450h returns better figures than most rivals. The RX 450h also sits in lower company-car tax bracket than most full-size SUVs.

Despite a large 3.5-litre V6 petrol engine in the hybrid RX 450h model, it has better fuel economy than you might expect, returning up to 48.7mpg according to the latest WLTP testing procedure. Go for a trim level above SE, or choose the heavier RX L, and this figure falls to 47.9mpg. We found 45mpg to be easily obtainable around town, but motorway journeys recorded a figure closer to 35mpg. That's still enough to beat many seven-seat diesel SUVs, though. 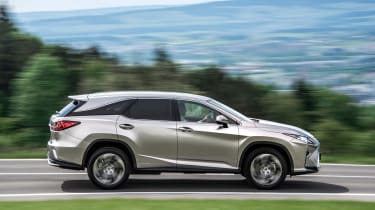 Company-car buyers may also be interested in the 450h, thanks to its 132g/km official CO2 emissions figure, it qualifies for a Benefit-in-Kind (BiK) company-car tax rate of 27% – a lower bracket than many of its diesel rivals occupy.

The latest Lexus 450h occupies insurance groups 41-42 out of 50. It's quite an expensive car to insure, then, but this reflects its power, the desirability of the Lexus badge and the high level of equipment on board.

Lexus is a luxury brand and with that comes servicing prices to match. Expect a minor service to cost around £300 and a major service around £500. Parts could cost more than they would from the average manufacturer, but at least Lexus dealers are consistently voted the best in the UK.

Lexus is part of Toyota, but while the latter offers a five-year/100,000-mile warranty on its cars, the luxury brand's vehicles are limited to a three-year/60,000-mile warranty. The hybrid components of the 450h are covered for five years or 100,000 miles, though.