How do turbos work?

Turbochargers are becoming increasingly common, but how do they actually work?

In the quest for greater fuel economy, many carmakers are turning to turbochargers (often just called ‘turbos’) to make their engines more powerful and efficient. The latest Porsche 911, for instance, has turbochargers as standard, and BMW has also used turbos in its latest M3.

It’s not just sports cars that have turbos, though. Many mainstream cars now come with one: all of the petrol engines in the Ford Mondeo, for instance, use turbochargers, and almost all modern diesel engines have a turbo as well.

The explanation for the recent popularity of turbochargers is simple: they allow manufacturers to make their cars more efficient by making engines smaller, without losing out on power. But what’s going on under the bonnet – how do turbochargers work?

Think back to your school physics lessons and the ‘fire triangle’ of fuel, heat and air. Increase one of these factors, the theory goes, and you increase the size of the fire.

A turbo is a big fan blowing extra air into the engine – it’s that simple. Inside a car’s engine, thousands of small, controlled fires are ignited and extinguished every second. When you press the accelerator you increase the amount of fuel in that fire, therefore making a bigger fire and producing more power.

The heat side of the fire triangle can’t really be increased, because petrol can’t get any hotter – it ignites and turns to gas above a certain temperature (this is the principle on which internal combustion engines operate) so there’s no room for improvement there. 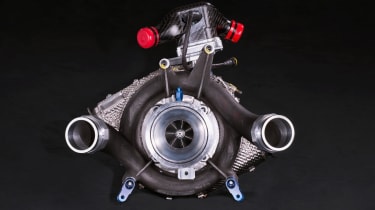 As far as increasing the amount of fuel in the triangle, there’s a limit to how much fuel can safely be injected into an engine before those carefully controlled fires become uncontrolled. Manufacturers can make bigger engines that burn more fuel and therefore make more power – providing a faster car – but larger engines cost more money to make, use more fuel and take up more space under the bonnet.

Air – the last remaining factor in the equation – offers a solution: increase the amount of air in the fire triangle and you’ll have a bigger fire. Anyone who’s ever been camping knows blowing on a fire helps it along. This is where the common-or-garden turbocharger comes into play.

A turbocharger uses high-pressure exhaust gasses emitted from the engine to spin a small fan, called a turbine, at enormous speed – around 250,000 revolutions per minute. This forces fresh air into the engine. This extra air – combined with the heat from the spark plugs and the fuel the engine runs on – makes a bigger, more powerful explosion, as it must, according to the principles of the fire triangle. It also allows the engine to burn more fuel, as the air and fuel mixture is compressed more by the turbo.

Engineers have found that by reducing the size of a car’s engine and fitting turbos, it’s possible to offer the power of a larger non-turbocharged engine with the fuel economy and emissions of a smaller one.

How does a supercharger work?

While this takes some power to run, the power that’s gained from the extra air being forced into the engine outweighs the amount of power taken to run the supercharger itself.

Superchargers tend not to be as efficient as turbos, but some cars – like the Jaguar F-Type R – still use them, and Volkswagen even paired a superchargers and a turbocharger in the previous-generation VW Golf TSI – something also called ‘twin charging’.

The theory behind turbochargers and superchargers is no more complicated than blowing on a fire to make the flames bigger. Obviously, the practical application of turbos must be carefully controlled and engineers have come up with refinements over the years such as intercoolers, which cool the air, allowing it to become compressed (more physics lessons) and therefore, more efficient in its operation. The principle, however, is that turbochargers and superchargers are just powerful fans blowing extra air into the engine to provide more power.