What is a head-up display, or HUD?

The modern driver is discovering something fighter pilots have long known to be true: head-up displays are a great piece of technology 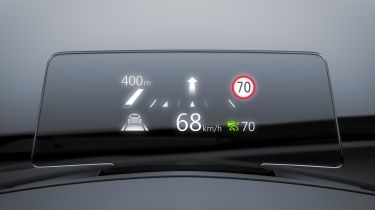 As cars feature more and more infotainment options, touchscreen displays and digital dials, one criticism sometimes heard is that these systems, while useful in their own right, draw drivers’ attention away from the road.

That’s not something that can be said of the head-up display, or HUD. A large number of cars can be specified with a HUD, from the luxurious Lexus RX to the humble Mazda CX-3. Unless you’ve recently left the air force, you might not be familiar with what a HUD is and how it works. It’s also worth knowing that not all HUDs are created equal: there are two main types, and one is generally considered superior to the other. This guide gives you the heads up on HUDs.

Where to legally mount your sat nav

What is a head-up display?

A head-up display is a projector that beams essential driver information into your field of view, so that it appears superimposed on the road ahead in mid-air. Although this may sound distracting, HUDs are carefully designed to be almost invisible when they’re not being looked at directly.

Head-up displays were originally developed for military use during the Second World War. The system was viewed with scepticism at first, but it soon caught on. Air chiefs noticed that pilots using a HUD to control their weapons had more attention to spare on actually flying their planes – essentially because they were able to keep their ‘heads up’, rather than having to glance down frequently at ancillary gauges and dials.

Although the majority of car journeys are less demanding than most military exercises, a HUD can still be a useful box to tick on the options list. Carmakers looked into applying HUDs to cars back in the 1970s but recent technological advancements – together with the increasing affordability of complex electronics – mean more and more cars are now coming equipped with a HUD.

Why are HUDs fitted to cars?

Other than the fact it looks pretty cool, the main reason to have a HUD is to do with attention. It’s obviously better to keep your eyes on the road as much as possible, and a HUD removes much of the need to look away from where you’re going.

Secondly, because HUDs prevent you from having to glance away from the road to check your speed, for example, your eyes don’t have to alter their focus as much. This process takes place so quickly and reflexively you may not notice it occurring, but many collisions and near misses come about due to driver distraction. If you’re travelling at speed, you can travel a significant distance during the split-second it takes your eyes to readjust their focal point. While your eyes still need to adjust slightly when looking from the road to the HUD, the amount of refocusing required is lessened, and what’s happening on the road will remain in your peripheral vision.

What are the two different types of head-up display? 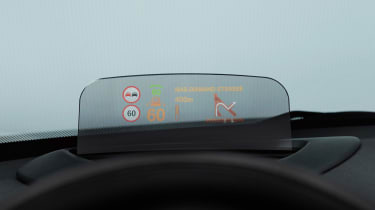 The easiest way for manufacturers to equip a car with a HUD is to use a ‘combiner’ system. This comprises a discretely hidden projector that beams its information onto a small transparent screen, or combiner. The combiner screen typically rises from the dashboard, and some can be lowered when the system is not in use. Many combiner screen HUDs are made by secondary manufacturers like Bosch. These can then be fitted by the carmaker at their factory, saving them the expense of having to engineer their own HUD system. The Mazda2, Peugeot 3008 and the new Renault Megane are some of the cars that allow you to specify a combiner screen HUD.

Combiner screens have softly-milled edges and an aspheric surface, meaning they’re almost invisible when viewed from dead ahead. If you’ve got a combiner HUD and find it distracting, check your car’s handbook to see if you can change the screen’s angle or the brightness of the graphics, as adjusting these settings should remedy matters. 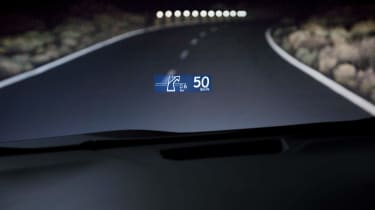 The second type of HUD still uses a projector but dispenses with the combiner screen, instead beaming its information directly onto the windscreen. This means there’s no (potentially distracting) combiner screen to worry about, and the carefully designed lines of the dashboard aren’t interrupted, either. In order for this type of HUD to work, the windscreen has to be specially treated to allow it to reflect the beamed information. Windscreen-projector HUDs are generally more expensive to make than combiner screen systems, so tend to be found in upmarket cars like the Jaguar XE, the BMW 6 Series and the Bentley Bentayga – and even with these cars, they're often an optional extra or reserved for high-spec models.

What information can you expect a HUD to show?

All head-up displays will show the car’s speed as a bare minimum. If the car has sat-nav, most will beam turn-by-turn directions onto the HUD – though don’t expect the graphics to be as detailed or plush as they are on the sat-nav screen – there’s a limit to how sophisticated the images shown by a HUD projector can be. HUDs can also display what gear you’re in, your fuel level and consumption, any engine warning lights that may come on, cruise control information and the road’s speed limit – assuming your sat-nav supports this feature, or your car has a traffic sign recognition system.

To learn more about safety systems like head-up displays, check out our comprehensive guide to the technology protecting you on the road today.