From reversing cameras to night-vision systems, modern cars often come with a host of cameras to help keep you safe. We explain all 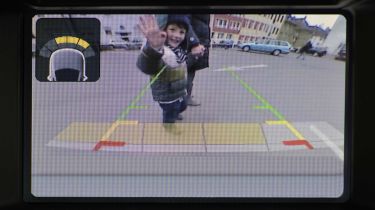 Cameras are now so widely used and accesible, it’s easy to forget that a decade ago a mobile phone with a camera was an impressive novelty. Thanks to the ever-increasing sophistication and decreasing cost of camera components like lenses and sensors, carmakers are continually finding new ways to integrate cameras into the portfolio of safety systems they offer. This can in effect give you an extra set of eyes, as cameras can be positioned to provide a view you wouldn’t be able to have naturally, while some setups can even see in the dark. We look at how carmakers have made use of camera technology to improve safety.

Reversing cameras, or parking cameras, first started to appear in the early 2000s and it’s easy to see why they’re becoming an increasingly common feature on new cars. Early reversing cameras had their own dedicated screen or displayed their images on the rear-view mirror, but almost all modern systems use the infotainment screen.

While there’s no substitute for careful reversing, having an unimpeded view of what’s behind you clearly offers a significant advantage when backing up – so much so that in the US, reversing cameras are set to become mandatory on all new cars sold from 2018. 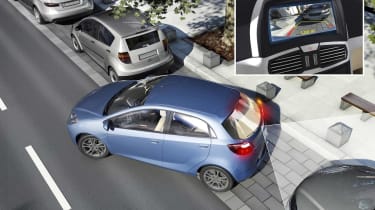 Reversing cameras typically use a wide-angle lens to give a broad view of the area behind you and point slightly towards the ground so you can avoid running over small objects, animals or worse. In addition, many reversing cameras superimpose guidelines to make getting into tight parking spaces easier.

Reversing cameras are particularly useful in large estate cars and SUVs, but many drivers find that once they’ve got used to the convenience they offer, having a car without one is a pain. If your car doesn’t have a reversing camera but you’d like one, it’s possible to have one retrofitted for a few hundred pounds.

360-degree cameras are essentially an evolution of the reversing camera, but use three or more cameras to give a ‘bird’s-eye’ view of your car. The Nissan Qashqai was one of the first mainstream cars to offer this system; its on-board computer used images from the boot-mounted reversing camera, together with two cameras mounted under the door mirrors, to build a up picture of the car as if viewed from above. Some more advanced systems work with autonomous parking systems, which essentially allow the car to park itself. While the 360 camera is undoubtedly a clever invention, whether you consider its advantages over a traditional reversing camera to be worth the extra money is, like the system itself, a matter of perspective. 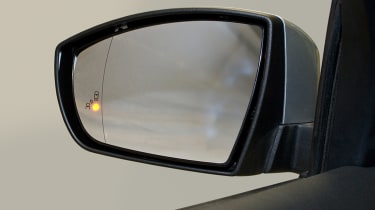 The Volvo S80 was the first car to offer blind-spot monitoring, and its Blind Spot Information System (BLIS) comprised cameras on the door mirrors that scanned the car’s blind spots while a computer analysed these images. If the BLIS detected anything it thought was a vehicle in the blind spot, a red light on the windscreen pillar illuminated, warning you it was unsafe to change lanes. Modern blind-spot monitoring systems scan with radar rather than cameras, while the Infiniti Q70 features a blind-spot system that’ll lightly apply the brakes on one side of the car, correcting your manoeuvre if it senses you’re about to have a collision. Blind-spot monitoring systems are often paired with another safety system, called ‘rear cross-traffic alert’. This uses sensors on the back of the car to warn you of oncoming vehicles you might not immediately spot when reversing out of a driveway or parking space. 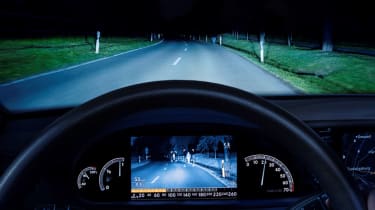 We’re almost getting into James Bond territory here, but night-vision cameras are becoming an increasingly common option – on high-end luxury cars, at least. The thinking is that a night-vision camera can help you avoid a collision when it’s dark. Images from a front-mounted infrared camera are displayed on the infotainment screen, a screen by the dashboard gauges or even on a head-up display in your line of sight. Any object hotter than the general surroundings (such as an animal, pedestrian or car exhaust) shows up as a bright white image, making it easier for you to spot. While this might sound like a distraction rather than an advantage, Mercedes’ Night View Assist Plus system can work in the background, only alerting you if it detects a heat-emitting object.

Ford and Volkswagen are leading the way with this system. The new Ford Edge, as well as the Ford S-MAX and Ford Galaxy, can be ordered with a split-view camera, which uses a front-mounted camera and ‘splits’ its footage into left, right and central views, which are then displayed on the infotainment screen. This minimises the need to ‘peep and creep’ at tight junctions, as you can more easily see oncoming traffic and pedestrians. The Volkswagen Passat and Touareg, meanwhile, can both be ordered with Area View, which includes a split-view camera in addition to a 360-degree ‘bird’s-eye’ camera.

For more information about car safety, head over to our detailed guide to the various systems that help protect you on the road.