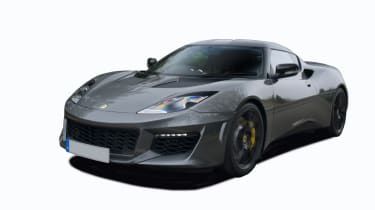 You can think of the Lotus Evora as a grown-up version of the Lotus Elise. Though sharing very few common parts, the Evora uses the same low-volume, largely hand-built methods of construction and is designed along similar lines. Like the Elise, it’s mid-engined and uses a Toyota engine.

Rather than the 1.8-litre four-cylinder of the Elise, the Evora uses a 3.5-litre V6, which feels far more like a supercar engine than its passenger-saloon lineage suggests, especially since all models now use a supercharger to further boost output, which starts at 400bhp.

Either version of the Evora is considerably more useable as a road car than the Elise and is sure to delight drivers on circuit forays, too. The range opens with the Evora 400, which combines low weight with high power to great effect. Going from 0-62mph takes a scant 4.1 seconds and the race-track top speed is 186mph.

Some drivers will still yearn for more, though, and for them Lotus offers the Evora 410. No Evora has a shortfall of power and this version only has a slight boost to 410bhp, but more importantly, Lotus has gone over the car with a fine-tooth comb, looking for opportunities to shed weight. The result is the already-light 1,430kg is reduced to a featherweight 1,325kg, while the aerodynamics are modified to add downforce, honing the Evora’s already sharp road manners even further.

Although it’s lost weight, this version has gone up in price. The Evora 410 costs £82,000 and there are many other extremely capable sports cars available for that kind of money, including an entry-level Porsche 911 or Nissan GT-R. The Lotus was never meant to be a rival to those cars, though – it’s more of an alternative. While similarly-priced sports cars are bloated by the weight of sound deadening, cushioning and creature comforts, the Lotus is focused – providing just the bare essentials for an undiluted on-road experience.

Such is the thoroughness of the Evora’s design, it’s comfortable almost by accident. Because the car is so light, the suspension doesn’t have to work hard to control it, so the springs don’t have to be hard. This gives the Evora a much smoother ride quality than you might expect. Thanks to the CEO of Lotus being six-foot-five tall, the Evora has been designed to be suitable for tall people to drive. The boot can handle two sets of golf clubs and there’s a pair of tiny rear seats, although they’re really only suitable for small children.

The Evora, first and foremost, is a car for enthusiasts. Those wanting a car that’s merely very fast and great to look at would be better off with a Porsche 911. Somebody looking for the ultimate in straight-line speed and computer-enhanced handling should take the Nissan GT-R. For those in search of a simple single-minded, thoroughbred machine designed for pure driving exhilaration, the Evora hits the target with typical Lotus precision.

It’s fair to expect that a high-performance car like this will offset the joy you experience behind the wheel with misery when it comes to running costs. Indeed, a car of this nature will take some looking after.

However, a further virtue of the Evora’s light weight is that the engine doesn’t have to work very hard to move it. It manages fuel economy of 29.1mpg – a fairly disastrous figure for a family car but not at all bad for a sports car that can manage 186mph. The 410 version posts the exact same fuel consumption figures.

CO2 emissions figures are less impressive at 225 grams per kilometre. This means that you’ll be paying £295 a year on road tax – or £500 if you choose the optional six-speed automatic transmission.

Servicing costs are hard to predict – when a Lotus visits the service department, it goes through a rather more specialised process than a regular family car and attention is paid to those parts that have become worn in use, as well as routine items like the oil or air filter.

On any car like this, expect the temptation to make use of all that power to lead to a need for regular replacement of tyres, brake pads and discs.

When launched the Evora used a 3.5-litre Toyota V6 engine producing 276bhp. Despite providing performance that few would find disappointing, it’s been given a thorough workover for today’s Evora. It now uses a supercharger to boost power to 400bhp.

It revs smoothly and eagerly and makes it possible to use every bit of the power available. It’s exciting without ever feeling uncontrollable. When we tried the the 410 model it was just about possible to spot the effect that the extra 10bhp made – 0-62mph drops to 3.9 seconds – but there was far more than just that to celebrate.

It all comes down to that weight saving and the effect of the extra aerodynamic downforce. Whereas the basic 1,430kg Evora has 32kg of downforce pushing it onto the track at 150mph, the 1,325kg Evora 410 has twice that amount, and you can really feel it.

Body lean in corners is almost imperceptible, there’s huge grip form the sticky-treaded Michelin Pilot Sport Cup 2 tyres, the steering responds to the flick of a wrist and the brakes have ample power to bring the Evora to a halt repeatedly without the driver losing confidence. Overall, the Evora 410 provides just about the most immersive, involving driving experience you could ask for.

No matter how much fun you’re having on the track, at no point are you likely to complain about the ride. Despite its take-on-all-comers racetrack attitude, the Evora has a soft, absorbent ride that tells of a car which has been carefully designed from the ground up.

If you take a normal sports car and strip it down for light weight, you’re bound to make it uncomfortable and noisy – a Porsche 911 racing car is a hot, noisy and unpleasant place to be, fine for a quick 10-lap race but horrible to live with day-to-day. The Lotus Evora is quite the reverse.

It was designed from the outset as a bigger, faster, more comfortable Lotus Elise. The well-positioned seats, simple, easily-read dashboard and spacious footwell and pedal box, were designed from the off. The light weight of the car translates to a soft ride, and because the tyres don’t have to be exceptionally wide, they don’t make a huge amount of noise.

You get air-conditioning and an infotainment screen (both standard on the 400 but optional on the 410 – re-installing them brings back some of the weight that you paid extra to lose), and the heated seats are trimmed in attractive, tactile leather, but the interior finish isn’t as plush or lavish as what you’ll find in other £80,000 cars. Much of the dashboard is covered with an man-made Alcantara suede material

It doesn’t look flash, but nor does it look shoddy, and more importantly you really can use the Evora every day without risk of being deafened or having your fillings rattled out.

Boot is small and optional rear seats are incredibly cramped

The Lotus Evora isn’t a car for suitcases, but if you have the right soft luggage you’ll find that the storage area at the back is surprisingly accommodating. It’ll take enough luggage to support a long weekend at a country hotel, or more if you use the rear seats as an extension to the boot.

Those rear seats really are only suitable for the smallest of children, indeed they come with isofix fittings for a child seat to be securely installed. Note that the 410 version makes do without any rear seats at all.

Remember, this isn’t a do-everything car like some similarly priced sports cars. The Porsche 911 will swallow a small family for a day of fun and return home in time for tea with no drama or fuss. The Evora can’t do that, but makes sure that its driver and passenger savour every second of the experience.

Toyota engine should prove reliable, but build quality could be better

The Evora’s engine is sourced from Toyota, so reliability shouldn't be much of an issue. Other mechanical components such as the gearbox, suspension and brakes have been sourced from high-quality suppliers and developed with Lotus expertise, so they’re similarly unlikely to let you down.

Perceived quality inside the Evora may not be as high as that of similarly priced mass-production sports cars, but this is partly due to the Lotus’s lightweight design and construction. Some materials inside the car feel thin and light because they are. This, unfortunately, results in a cheapness of feel that’s hard to deny.

Other areas are far easier to appreciate for the quality they can undoubtedly boast. The switchgear is mostly bespoke and satisfying to use, while the way the body and chassis are assembled is beyond reproach. Sadly, until more Evora owners contribute to our annual Driver Power owner satisfaction survey, we have no real-world record of just what these cars are to live with long-term.

Unfortunately, the Evora hasn't been officially crash-tested by Euro NCAP, so it doesn't have an independent safety rating, but it does have airbags, traction control, ABS and other safety technology as standard.

Not cheap to buy, but there's a decent amount of kit

The Evora is a far more esoteric proposition than a Porsche or Jaguar, though. Your money goes towards the precision build of the chassis and body, the thoroughness of its design and economic restraints of slow, labour-intensive production by people instead of robots. A Lotus is a very specialist machine and those who love them know this all too well.

Lotus is unlikely to struggle to sell every Evora it can build – there are plenty of wealthy buyers out there who appreciate exactly what the Evora is, and none of them will have any criticism of the Evora’s value for money. 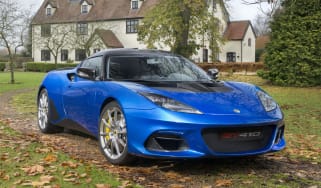 Live updates around the clock
Skip to ContentSkip to Footer