The Mercedes EQC is quick but majors in refinement and comfort

Tesla has played a big part in popularising the neck-straining acceleration possible in EVs, and not wanting to be left behind, the big European players have followed suit. We'd expect fewer internet videos of EQC acceleration startling passengers, though, because it doesn't feel quite as fierce in its delivery.

Instead - and fittingly for a Mercedes - the EQC becomes the most refined and comfortable electric SUV in its class. Even at higher speeds its electric motors remain virtually inaudible, and wind and tyre roar are well suppressed too. Over rough tarmac the suspension does a good job of soaking up bumps, and here the extra weight of its battery pack actually feels like an advantage. 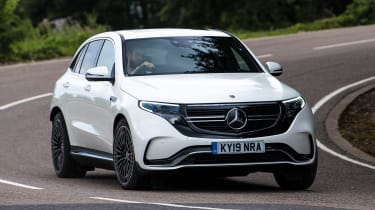 This comes slightly at the cost of handling; weighing around 2.5 tonnes, the EQC won't excite like an I-Pace. Body lean is well controlled and helped by a low centre of gravity but its steering isn't particularly sharp or communicative. Cycling through Eco, Comfort and Sport driving modes makes it slightly heavier but a sharper throttle response is more noticeable. It's also possible to mix and match settings or choose a ‘Maximum Range’ mode. This works with the sat nav and on-board cameras to help predict regenerative braking to suit the corner, junction or traffic you're approaching and peg top speed at the current limit. In reality, we doubt owners will use this too much unless they really want to eke out every last mile, as it feels rather restrictive.

The Mercedes EQC has two electric motors - one for the front wheels and one for the rears. Together these produce around 402bhp, so despite weighing around 2.5 tonnes, the EQC can leap from 0-62mph in 5.1 seconds and its top speed is limited to 112mph. Acceleration is swift, with a familiar EV sensation of instantaneous response - there are no turbochargers to spool up or an optimum rev range to hit.

Braking can be left largely to the electric motors, which act as generators when the car is slowing down to put energy back into the battery pack for additional range. The amount of regenerative force can be modulated by pedals behind the steering wheel but you still have to touch the brakes to come to a full stop, so 'one-pedal driving' isn't quite possible.