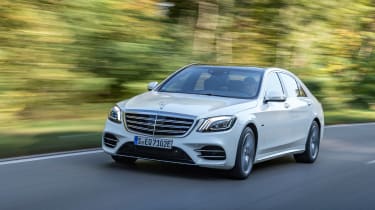 There have been both plug-in and non-plug-in hybrid versions of the Mercedes S-Class previously, but thanks to improvements in battery technology, the S 560 e is the first hybrid S-Class capable of travelling a distance of any significance on electric power alone.

The car is powered by a 3.0-litre V6 petrol engine and an electric motor connected to a 13.5kWh battery. In combination, the hybrid setup provides a very respectable 469bhp and is capable of powering the car completely electrically for around 30 miles.

While straight-line speed is excellent for such a large car (0-62mph takes five seconds), official economy figures of 113mpg and 57g/km CO2 emissions also make the S 560 e much more palatable in terms of running costs and company-car tax than many other S-Class variants.

Other than the powertrain, the S 560 e is like any other S-Class, providing a beautiful interior, comfortable ride and luxurious amounts of passenger space. The S 560 e is a little different to drive because of the way the electric motor delivers its power, but you quickly get used to it.

It’s a shame the car only has a 7.2kW built-in charger rather than a fast DC version, which would allow a full charge in less than the 90 minutes Mercedes quotes for the existing one, because it makes it more difficult to use the car in pure electric mode more of the time. And those who want an S-Class primarily for long motorway journeys will be better served by one of the diesel models.

However, if your S-Class will see most of its action in shorter journeys around town, the S 560 e should be very appealing. It’ll be vastly cheaper to run when used this way, and offer the added bonus of virtually silent running – something that’ll be particularly appreciated by those regularly chauffeured around in the back of one.

Because the S 560e is capable of running on pure electric power alone, it returns an eye-catching official fuel-economy figure of 113mpg. CO2 emissions stand at 57g/km, making the car an attractive proposition for company-car drivers, as it falls into the 16% Benefit-in-Kind bracket as a result. Be aware that the exact wheel size you choose will have a small affect on emissions. 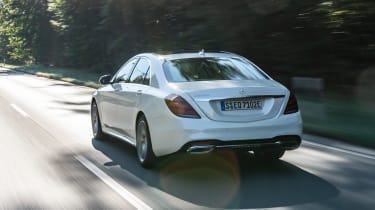 The more high-speed driving you do in the car, the more the petrol engine has to work, and you won’t see anywhere near the official economy figures as a result. If long motorway slogs will make up the majority of your, we’d recommend buying a diesel S-Class rather than this one. However, for shorter trips around town, the hybrid could well be the better bet, particularly when you take the tax benefits and the opportunity of near-silent running into account.

The S 560 e uses a 362bhp 3.0-litre V6 engine paired with a 121bhp electric motor to the give the car a headline power output of 469bhp. That makes it seriously quick considering its size, with 0-62mph taking five seconds flat and an electronically limited top speed of 155mph. A nine-speed automatic gearbox comes as standard. 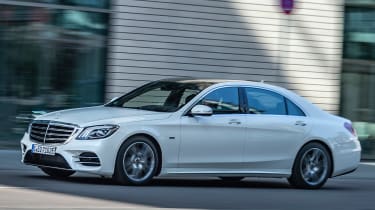 The way the S 560 e delivers its power takes a little getting used to, as the electric motor can supply all of its power instantly, but once you master how to use the throttle pedal, the car glides around town smoothly and often silently when the petrol engine isn’t required.

The S-Class is generally not designed to reward its driver – the comfort of passengers in the rear seats takes priority – but it’s still a very nicely poised and secure car to drive. The steering doesn’t offer much in the way of feel, but it is precise, and although the suspension is soft and comfortable, it doesn’t allow the car to pitch or roll too much in corners.

The principle purpose of the S-Class is to feel like a limousine inside and the S 560 e is no exception. It’s refined, spacious, luxurious and laden with all the technology you could ever really want or need. 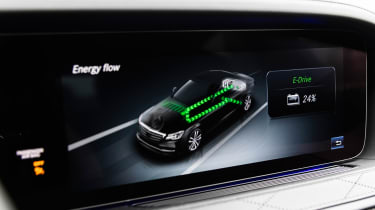 Two 12.3-inch TFT screens sit side-by-side on the dash to take the place of traditional dials behind the steering wheel and act as the interface for the COMAND infotainment system, which is operated by a rotary controller on the centre console. The interior is covered in swathes of leather and wood veneer as standard, plus there’s two-zone climate control, parking assistance with a rear-view camera, LED headlights, heated front seats, and ambient lighting at no extra cost.

As you’d expect of a flagship Mercedes saloon, there are myriad ways to upgrade the luxury even further, including an executive seat package, built-in TV screens for passengers in the back seats, a wi-fi hotspot and a 24-speaker stereo system.

The S-Class is one of the most spacious cars on the market for rear-seat passengers, but this doesn’t come at the expense of the people sitting in the front. The position of the front seats can be adjusted in several different ways, so it’s easy to get comfortable and for the driver to find their ideal driving position. 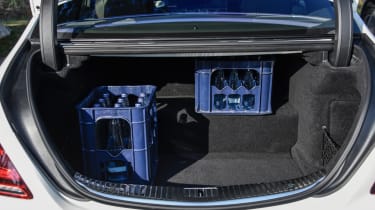 Boot space in the standard S-Class stands at 500 litres, but the batteries for the electric motor in the S 560 e reduce this slightly and put a step in the boot floor.

The S-Class comes loaded with safety technology, with more available as optional extras

The Mercedes S-Class didn’t feature in our 2018 Driver Power owner satisfaction survey, but as a brand, Mercedes finished 20th out of 26. One potential reason for the relatively lowly finish is the high expectations of Mercedes owners, and it should be noted that BMW, Mercedes’ most direct rival, finished one place lower.

The S-Class is loaded with safety technology, so although there’s no Euro NCAP score to refer to, you can be very confident it’s a safe car in which to travel. Standard kit includes eight airbags, a traffic-sign recognition camera and a driver drowsiness monitor.

A £2,300 Driving Assistance Package is available as an option and adds blind-spot monitoring, lane-keeping assistance and adaptive cruise control, plus a night-vision camera and novel rear seatbelts that feature integrated airbags.

The exact specification of S560 e hasn't been confirmed but it will be offered with all the same options as the existing models in the S-Class range.

Options and upgrades will be numerous, encompassing style, safety, convenience and luxury. 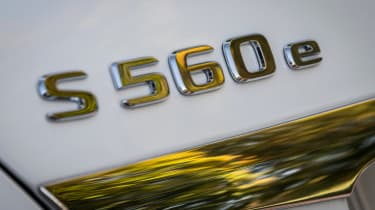 The Mercedes S560 e is a direct alternative to the BMW 740e iPerformance and the latter remains a more appealing choice if driving enjoyment is your highest priority. The Mercedes fights back with better ride comfort, though, and is actually more powerful than the BMW, so quicker in a straight line too. 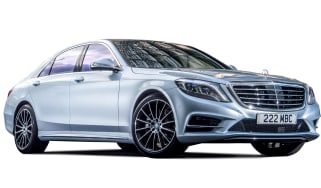 “One of the most luxurious, advanced and expensive hybrids available”
Skip to ContentSkip to Footer