“As a luxury saloon, the Mercedes S-Class is hard to beat. It has ruled the class imperiously for years and it’s difficult to see when that might change”

The Mercedes S-Class executive saloon is the brand’s most luxurious model and a showcase for the advanced technology that could filter down to less expensive Mercedes models in the future. Comfort, prestige, luxury and space are traditional S-Class watchwords and this latest model is no exception. Regardless of whether you’re driving an S-Class or a passenger in one, travelling in Mercedes’ flagship luxury saloon is an experience to savour.

Many rival manufacturers have offered their own take on the Mercedes S-Class; the Audi A8 and BMW 7 Series are direct rivals, while cars like the Range Rover, Rolls-Royce Ghost and Bentley Flying Spur offer similarly luxurious experiences, albeit with considerably higher price tags. 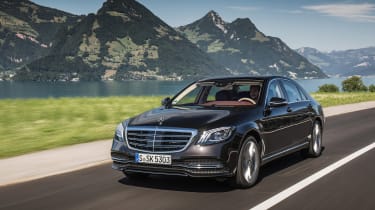 The current S-Class received a few subtle design tweaks in 2017, including new LED headlights that incorporate a three-piece daytime running light design, but overall it was a refresh that left the understated design largely unchanged. There were bigger changes under the bodywork – the latest autonomous driving technology was introduced and a new range of petrol and diesel straight-six engines replaced the old V6 and V8 units.

There were big changes at the high-performance end of the range, too. The range-topping Mercedes-AMG S65 with its big 6.0-litre V12 engine was killed off and the S63 was given a smaller, more economical twin-turbo 4.0-litre engine to replace the old 5.5-litre unit. But before executive muscle-car enthusiasts throw their hands up in despair, the latest engine has more power than the old one: 604 versus 577bhp. The S-Class will evolve again at the end of 2020, with a new model that's even set to get all-electric power in an EQS version.

For buyers who want a V12, the super-luxurious standalone Mercedes-Maybach S650 is still available with its focus on comfort above all else. It’s doubtful that the 621bhp power output in this flagship S-Class will disappoint, either. The latest S350d boasts a 282bhp straight-six diesel making for one of the most economical luxury saloon cars you can buy, while city-based drivers will be impressed by the S560e hybrid, which we’ve reviewed separately.

You can choose to have your S-Class in Grand Edition form, as a performance focused Mercedes-AMG model or take the Mercedes-Maybach luxury route. The only standard wheelbase S-Class is the S350d with all the other engine options, including the S560e hybrid, coming in super-spacious long-wheelbase ‘L’ form.

There are two long-wheelbase versions of the high-performance Mercedes-AMG S63 L, with a standard version and a Premium badged model topping the range. 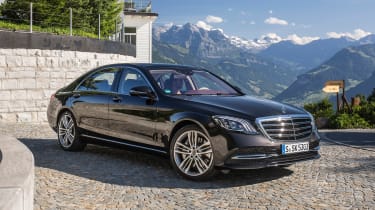 While Euro NCAP hasn’t crash-tested the S-Class – it doesn’t sell in big enough numbers to warrant it – you shouldn’t have any worries regarding its safety. This car is known for pushing the boundaries when it comes to groundbreaking safety technology and the latest version is no exception.

You also get all the familiar trappings of a luxury saloon – leather, wood, space in abundance and a supremely comfortable ride – even on the high-performance versions. For most, however, the S350d diesel will be easily quick enough. And as it returns up to 44mpg and is the cheapest version to buy, it’s the most sensible option, too.

The S-Class’ price tag is pretty high and some versions’ running costs will be huge, but for many buyers the unrivalled sense of comfort and futuristic technology make this car worth it. If you're in the market for a large, luxury saloon, it's hard to beat the S-Class as a complete package.