The Mercedes SLK is billed as a luxury model, so it certainly isn’t cheap and has a higher starting price than both the Audi TT Roadster and BMW Z4. However, this difference is somewhat justified by the Merc’s folding metal roof – its rivals both use cheaper and less secure fabric hoods.

The SLK has a great reputation and it holds its value as well as the TT Roadster and Z4 on the used market, but the Porsche Boxster retains even more of its original list price, partly thanks to its greater exclusivity.

Every version of the Mercedes SLK is fitted with fuel-saving stop-start technology as standard, as well as an economy mode to encourage gentle driving and increase fuel efficiency.

Unlike some of its rivals, the Mercedes SLK was available with a brilliant diesel engine capable of 56.5mpg that emits just 132g/km of CO2 and costs £130 each year in road tax. These are impressive figures, but the diesel Audi TT Roadster's 61.4mpg and 121g/km figures are even better. 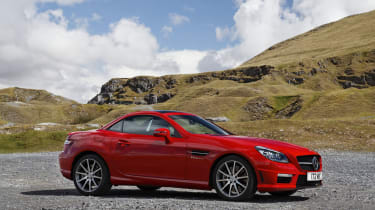 The entry-level SLK 200 petrol returns 41.5mpg and emits 158g/km, so it costs £185 in annual road tax. The more powerful SLK 250 is actually more economical with its automatic gearbox, managing to return 42.8mpg and CO2 emissions of 153g/km.

Even the V6-engined SLK 350 is respectably affordable to run, with its 39.8mpg economy and 167g/km emissions beating the entry-level Porsche 718 Boxster’s figures of 38.2mpg and 168g/km.

Insuring the Mercedes SLK will cost you a good bit. Most versions fall into insurance groups 41 to 45, with the SLK 55 AMG in the highest possible insurance group 50. You’ll pay similar money for Porsche Boxster insurance, although the BMW Z4 comes in at a slightly more reasonable cost.

The SLK comes with a warranty that covers it for unlimited miles up to three years of age.

Service intervals for the SLK alternate between a major and minor service, occurring every year or 15,500 miles, whichever comes sooner. You can take out a Service Care package that costs £26 a month and covers servicing for up to four years.