"The Mercedes SLK is stylish and offers impressive refinement thanks to its folding hard-top, along with affordable running costs."

While the Mercedes SLK is a direct rival to the Audi TT Roadster, BMW Z4 and Porsche 718 Boxster, all three offer quite a different feel. The SLK is the most relaxing and arguably the most luxurious choice. It’s surprisingly good to drive over long distances and very easy to live with on a daily basis, partly thanks to its generous boot.

The SLK has now been replaced by the Mercedes SLC, which is essentially a facelifted version of the same model with a new badge to fit Mercedes’ latest naming convention for convertibles. However, it’s still possible to find nearly new and pre-registered SLKs to buy. 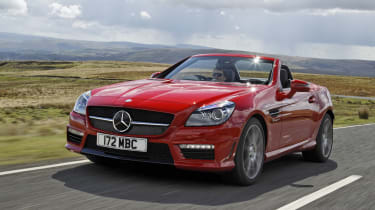 Under the bonnet, there’s a choice of two turbocharged petrol engines, one diesel, as well as high-performance V6s and V8s. The last two offer rapid performance, but also very high running costs. Defying convention, the diesel was actually our top pick, thanks to its impressive mid-range acceleration and low running costs, which fit the character of the SLK very well.

The SLK was never a cheap car, though, especially when expensive options like the COMAND system with sat nav, media connections and traffic updates were added, easily setting you back around £2,000. Even rudimentary cup-holders for the centre console cost £50. Luckily, the prestigious Mercedes badge and the good reputation of the SLK means it holds its value well on the secondhand market. 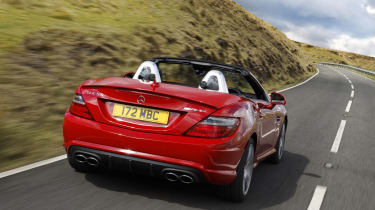 It has a mature air, too, largely because its folding metal roof brings an added feeling of security and boosts its appeal in winter months. Because it was designed from the outset to be a convertible, the sleek roof and special wind deflectors also mean the SLK is one of the least blustery cars in its class with the roof down.

It might seem surprising on a convertible, but the panoramic roof called Magic Sky Control is a nice feature, giving the SLK a light and airy feeling even with the roof up and even letting you vary the light transmitted through it.