"The Mercedes SLC is a competent cruiser with a folding metal roof, but its rivals are more exciting to drive"

What’s in a name? Well, for the Mercedes SLC, quite a lot. Mercedes may claim its SLC is an entirely new model, but it’s actually just a re-styled SLK with a letter changed. It competes with the likes of the BMW Z4, as well as convertibles such as the Audi TT Roadster and Porsche 718 Boxster.

The SLC is a quiet, comfortable car, and appealing in many other ways, too. Its diesel engine is impressively frugal, the folding metal roof adds a welcome sense of security and can be operated at speeds up to 25mph, while Mercedes’ ‘Airscarf’ (a £400 option) blows hot air at your neck to ensure top-down driving can be enjoyed even on chillier days. 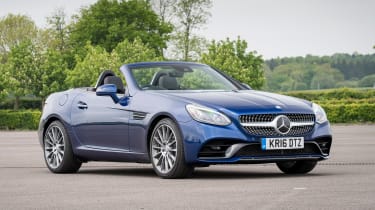 A manual gearbox is standard with the SLC 200 (you can have an auto if you like), while all the other models come exclusively with a nine-speed automatic. Mercedes also makes a 362bhp AMG SLC 43. This is appealingly quick, but at around £17,000 more than the entry-level SLC, it’s best thought of as a stand-alone model; it has its own specific equipment list, after all. 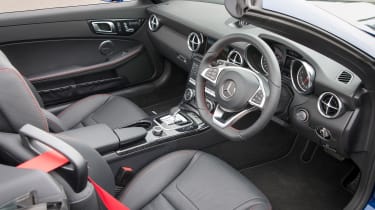 The SLC’s biggest problem is that, despite the facelift and name change, it feels decidedly old fashioned and doesn’t excel in any one particular area. Compared to the Audi TT Roadster it’s dated inside and out, while the Porsche 718 Boxster is light years ahead in terms of driver appeal: on the road the SLC is quiet and competent enough, but it’s far from thrilling and shudders over big bumps, which puts you off driving it quickly.

For some, the prospect of cruising around in a convertible Mercedes is all the justification needed for buying one. Just be aware such experiences don’t come cheap, as the SLC is pricier than the more modern TT Roadster. 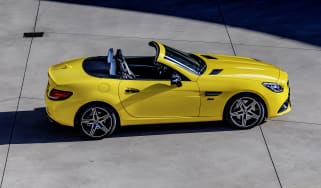 The Final Edition is the swansong for the Mercedes SLC convertible and starts at £37,120
Mercedes SLC 180 pumps up the value 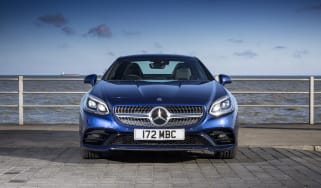 Mercedes SLC 180 pumps up the value