All engines in the Mercedes SLC are turbocharged. There are two 2.0-litre petrols with different outputs, a high-performance Mercedes-AMG SL 43 and a frugal SLC 250d diesel for cost-conscious buyers.

On the move, the SLC is focused more on relaxation than something like the Porsche 718 Boxster, but  feels quite agile in twisty corners thanks to Mercedes’ Dynamic Select system. This allows you to select different driving modes and stiffen up the suspension when required.

There’s very little body roll in corners and the car generates plenty of grip, but it can really shake and shudder as you go over big bumps in the road. That combined with steering that feels numb, vague and too light means the SLC lags behind both the Audi TT and Porsche 718 Boxster when it comes to driving thrills.

The petrol engines are quiet and refined but the ageing 2.1-litre diesel engine in the 250d is noticeably clattery when you start it and when it's idling. Once on the move it quietens down, making it a surprisingly good cruiser but it's worth knowing that Mercedes has already produced an improved 2.0-litre diesel engine to replace the one in the 250d - it's already being used in the latest Mercedes C-Class. 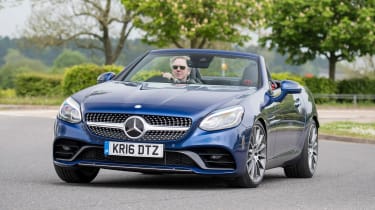 The SLC 200 petrol comes with a six-speed manual or nine-speed automatic gearbox, while the rest of the range is only available with the automatic. This is a good thing, because it’s a very smooth and refined gearbox, shifting up through the gears without you even noticing.

There’s only one diesel engine available in the Mercedes SLC and it’s badged SLC 250d. Confusingly, it’s actually a 2.1-litre turbocharged diesel engine, producing 201bhp. It’ll go from 0-62mph in 6.6 seconds and onto a limited top speed of 155mph.

This engine has plenty of punch for overtaking manoeuvres at speed, but can sound a little noisy when you start it up – especially with the roof down. On the move, though, it becomes much quieter and smoother.

The SLC petrol range kicks off with the SLC 200 – a turbocharged 2.0-litre engine producing 181bhp, while there’s also a 242bhp version, badged SLC 300. The 200 will go from 0-62mph in seven seconds and on to 149mph, while the 300 will do it in 5.8 seconds and is limited to a 155mph top speed. The engine in the SLC 300 is punchy and flexible, and while it doesn't sound as good as the 3.5-litre V6 in the equivalent outgoing Mercedes SLK, the noise gets better as the revs build, particularly with the optional sports exhaust.

We’ve driven the Mercedes-AMG SLC 43, which will be the choice of buyers wanting the fastest model in the range. It’s powered by a twin-turbo 3.0-litre V6 engine used elsewhere in the Mercedes line-up, which produces 362bhp and takes the car from 0-62mph in just 4.7 seconds.

Although this is quick, those used to the savage nature of the outgoing SLK55 will be disappointed by the SLC 43. It’s a far quieter engine, sounding purposeful rather than aggressive. Performance feels strong without ever being as overwhelming as the old car’s, and it isn’t as instantly responsive, either. This engine is more suited to covering long distances rapidly than sprinting between corners.