The Mercedes SLC has a lot of standard safety equipment, plus plenty of options

Mercedes has a good reputation for building solid cars, and the SLC feels well screwed together. There have been some complaints about the cost of maintenance, but the SLC’s predecessor proved to be reliable and safe.

Mercedes dropped to 21st in the 2017 Driver Power manufacturer rankings, behind Audi in 18th spot, Jaguar in 12th and BMW in ninth. Of the customers surveyed, 15.2% told us they had experienced an issue or fault within the past year. 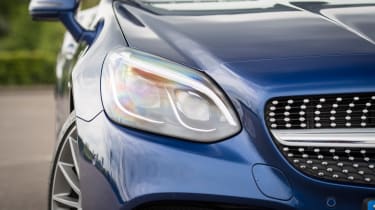 The SLK itself hasn’t featured in Driver Power, but there are few problems we’ve heard of with the car, which bodes well for ownership of the SLC. Some owners complain about how much it costs to maintain the SLK, citing parts and labour costs as high, but other see this as par for the course for a premium brand like Mercedes. The SLC does have strong predicted residual values, though, just like the SLK that went before it.

The SLC has yet to be crash-tested by Euro NCAP and the SLK wasn’t tested, either, but Mercedes has a very strong reputation for safety and the SLC comes with plenty of the brand’s latest safety systems available as standard or as optional extras.

It’s fully equipped with airbags and braking assistance systems, while autonomous emergency braking is standard on all models. The bonnet pops up to reduce the impact for pedestrians, and there’s also a system that detects driver drowsiness.

You can add safety packs to the SLC: these include blind-spot monitoring, lane-keeping assistance and a system that keeps you a certain distance from the car in front on long journeys. This works in traffic, too.