Two-seat sports cars aren’t designed to be practical, but the Mercedes SLC has one of the biggest boots in its class

The Mercedes SLC is about the same length as an Audi TT Roadster, but visibility in this kind of car is quite limited. That’s because you sit very low down and there are thick door and roof pillars. It adds up to a cocooned feel inside, but you’ll be thankful for the parking sensors and large door mirrors. Otherwise, there’s actually a surprising amount of room inside the SLC.

With the roof up, the interior of the SLC is surprisingly spacious. If you go for the panoramic sunroof, it feels particularly light and airy indeed.

There’s a good-size glovebox, two cup-holders behind the gearlever and a couple of other storage spaces in the door bins, but these are quite small and not really suitable for larger items. There is some storage under the armrest, though. 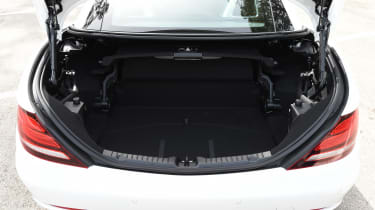 For such a small car, the Mercedes SLC has a pretty big boot. With the roof up, there’s 335 litres of space, which equates to 19 litres more than a Ford Focus hatchback. It’s low and wide, though, so you’ll be better off carrying bags that can be squashed than hard suitcases. This is also a good point for when the roof is down, too.

The way the roof is stored means that it eats into boot space, so the overall carrying capacity decreases to 225 litres when the top is down. The opening itself is much smaller, too, so bear this in mind if you’re using this car for weekends away. If you’re planning to put the roof down, you can place your luggage under a cover, so it won’t get in the way when you lower the roof.

In comparison to its rivals, the Mercedes fares pretty well. The Audi TT Roadster offers 250 litres of luggage space, while the Porsche 718 Boxster has a 150-litre space in the front of the car and 130 litres behind the engine.