The MG GS has a spacious and light interior, but the small boot lets it down

When it comes to interior space, the MG GS performs well. SUVs have become popular over recent years for a number of reasons, chief among which are the improved access they offer over conventional cars, and the sense of room the increased ride height brings inside. The GS is pleasingly spacious, with plenty of head and legroom in the front and back.

Many SUVs come with the option of four-wheel drive, and this means manufacturers have to build in space for the extra mechanicals this entails. Because the MG GS is two-wheel drive only, there’s no ‘transmission tunnel’ hump running along the floor, so the middle seat passenger doesn’t have to straddle a pronounced bump with their feet.

It’s a shame MG didn’t take full advantage of this feature, as the centre console (where the driver and front-seat passenger can rest their arms) slopes downwards into the rear footwell, and eats into legroom a little. The GS’ middle-rear seat is also hard and uncomfortable – though we could say the same about plenty of other cars.

There is, at least, a fair amount of interior storage – although there are no particularly huge or clever cubbies. You get a couple of cupholders in the rear armrest and decent size doorbins, while in the front there's a large storage compartment between the seats and reasonable-sized pockets in all four doors. 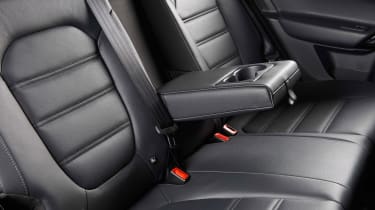 Aside from the lack of engine options, this is the only other area where the MG GS is noticeably lacking. At 335-litres, the GS boot is dwarfed by the Renault Kadjar’s 470-litres, while both the Nissan Qashqai and smaller SsangYong Tivoli have bigger boots, and by some margin.

On a more positive note, the rear seats offer 60:40 split-folding and lie totally flat when dropped – this is still not the universal feature you might think it is. We also praise MG’s decision to fit a space-saver spare wheel as standard. At a time when many manufactures supply a can of tyre sealant in a bid to save space, some punctures can’t be remedied by this, so having a bona-fide spare wheel provides welcome reassurance.

The MG GS impresses in this area with a 1,750kg towing capacity. This is more than the Renault Kadjar and Nissan Qashqai can manage when fitted with a petrol engine, and only 50kg shy of those cars’ limits if you order them with a diesel.