The MG GS hasn’t been put through its safety assessments yet, while MG owners report high levels of customer satisfaction

If MG GS customers are as happy with their cars as MG3 and MG6 owners, you can expect to enjoy the GS. MG put in a stellar performance our 2016 Driver Power customer satisfaction survey, and has done so for the last few years. In terms of safety, while the GS isn’t laden with the latest modern systems, it’s pleasing to see that even the entry-level model gets the same amount of protection as the top-of-the-range car.

It’s not fair to make predictions about how reliable a new model will be, but we can give you some background. In our 2016 Driver Power customer satisfaction survey, MG came fifth out of 32 manufacturers. Owners praise their cars’ low running costs, practicality and handling, as well as the comfort offered by their seats. A middling 12th place for reliability is less impressive, though.

MG only makes two other cars, and these occupy opposite ends of our survey when it comes to reliability. The MG6 came an unimpressive 122nd (out of 150 cars) in this area, while the MG3 excelled, with a 33rd place finish for dependability. Owners of both cars reported high levels of overall satisfaction, and we can only hope that the GS apes the MG3’s reliability record, rather than the MG6’s. 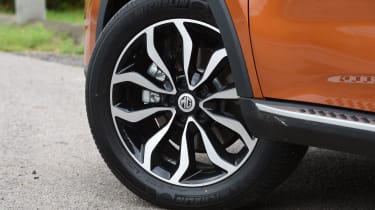 As we’ve already mentioned, the MG GS has yet to be formally assessed for its crash-worthiness. It’s pleasing to see that all cars come the same safety equipment, though. This includes mandatory systems like anti-lock brakes (ABS) and electronic stability control, as well as electronic brake force distribution and a host of airbags.

While some of the more sophisticated systems offered by other manufacturers (like autonomous emergency braking, for instance) aren’t offered, MG is one of the few manufacturers (along with BMW and Mercedes) to fit cornering brake control, or CBC. This works alongside the ABS to help avoid a loss of control if you have to brake heavily when cornering.