While it’s a little bumpy at speed, the MG GS is generally enjoyable to drive

MG is a historic English brand and, although it’s now under Chinese ownership, the MG GS has been designed with British roads and drivers in mind. The engine is quiet, smooth and eager to rev, the GS develops little body lean when cornering and the steering is accurate and provides plenty of feedback when taking a bend. Potholes and broken tarmac are nicely smoothed out during town driving, and the GS excels in the urban environment, partly thanks to the excellent visibility brought about by the high driving position.

It’s not perfect, though: driving over drain covers and speedbumps in town may cause little disturbance, but if you encounter poor road surfaces at speed, the GS bounces a little more than it should. Similarly, while the steering is accurate enjoyable to use in corners, the picture is less rosy when you’re cruising, as the wheel feels vague and light when driving in a straight line. 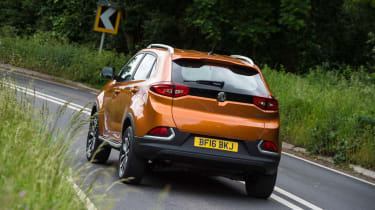 The MG GS’ turbocharged 1.5-litre petrol engine produces 164bhp and gets the car from 0-62mph in a reasonably swift 9.6 seconds. Around town it’s impressively quiet, while once on the motorway it’s almost inaudible.  It’s also very smooth when revving, and this is a good thing: because of the way the manual gearbox has been designed, the engine needs to work quite hard if you want to press on.

As we’ve mentioned before, this engine is the only one the GS comes with: if you want a diesel SUV, you’ll have to buy a different car.

Similarly, if you regularly drive in slippery conditions and want four-wheel-drive, too bad as this isn’t an option, despite the GS’ SUV rugged looks. While the lack of a diesel engine can fairly described as a drawback, missing out on four-wheel-drive is less of a disadvantage. Most SUV drivers spend their time on tarmac rather than off-road, and we generally advise buyers to choose the two-wheel drive option in order to save money on fuel.

You do get a choice of gearboxes, though: the MG GS comes with either a six-speed manual or a seven-speed dual-clutch automatic gearbox, and we recommend the manual. The reason for this is simply to do with price: the automatic gearbox costs an extra £1,500, and is only available on the highest trim level. This pushes the GS’ price up to almost £21,000 and, without wishing to seem unduly harsh, there are better cars available for that sort of money.