As its name suggests, the MINI 5-door is a compact car, so don’t expect interior space to rival a Ford Focus

The MINI 5-door is 72mm longer between the front and rear wheels than the three-door. That’s a useful increase and much of it goes towards boosting rear legroom. Climb into the back seat and you’ll really notice the difference between the five-door and its smaller sibling. A larger rear cabin that’s able to carry two adults in relative comfort would be no use if the boot hadn’t also increased in size. Fortunately, thanks to extra bodywork behind the rear wheels, it has. MINI quotes no towing figures for the five-door – instead, the options list offers a range of lifestyle accessories for the active MINI owner.

As its name suggests, a MINI five-door is a compact car, so don’t expect Ford Focus-like interior space. Still, it’s usefully larger than the three-door, without losing any of that car’s essential cuteness and charm. The front of the cabin is as cosy as ever, but the rear seats can now accommodate two adults in relative comfort, once they’ve squeezed through the narrow door openings. You’ll be pleasantly surprised by the amount of space on offer – even behind a six-foot driver. 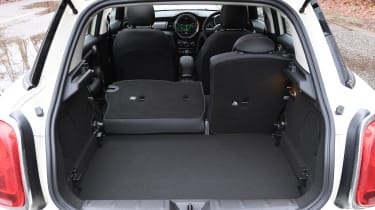 Headroom is good, too, even with the optional panoramic sunroof in place. Don’t expect to carry a middle passenger in the back for long, though, since the car’s narrow width makes things quite cramped here. 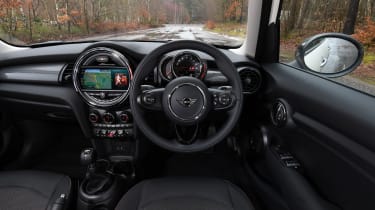 In addition to the extended wheelbase, there’s an extra 89mm of bodywork at the back of the five-door. This has been put to good use growing luggage capacity 67 litres to 278 litres in total – enough for a folding buggy and most of the week’s shopping.

MINI doesn’t quote towing figures for the five-door and in truth it’s too small to make a safe and practical tow car. Instead, MINI aims to capitalise on its appeal to young, active buyers by offering a huge range of accessories for surfers, cyclists, campers and skiers.