The MINI hatchback (including the three-door) didn’t feature in the 75 cars in our 2020 Driver Power customer satisfaction survey. MINI as a brand placed 26th from 30 manufacturers, winning praise for reliability but marked down for disappointing technology.

MINI owners told us that their cars were mostly reliable, with only 8% reporting a breakdown in the first year. However, while this above average reliability ranking is excellent, and one of the lowest recorded in our 2020 survey, the brand's lowly 26th place finish out of 30 manufacturers suggests that owners are less than impressed with other aspects of MINI ownership.

Among its most positive attributes are its engine and gearbox, exterior looks and build quality, while the MINI's handling is highly praised by its owners. However, owners also told us that running costs are higher than expected, and limited practicality was also widely acknowledged – although the latter won't be such an issue for five-door models. Respondents were also unimpressed with the infotainment systems, saying that they’re not as impressive as those used in BMW models. 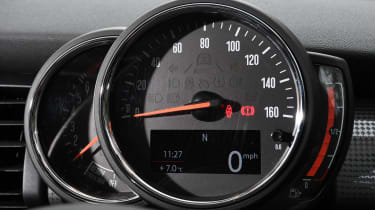 While the MINI five-door hasn’t been crash-tested by Euro NCAP, the three-door MINI on which it’s based scored a respectable – rather than exceptional – four stars out of five. Its 79% adult occupant and 73% child occupant ratings were good, but it was let down by the amount of safety assistance technology on offer and only scored 66% for the protection it offered to pedestrians in the event of a crash.

The car certainly has a full range of airbags (six, to be precise), as well as three ISOFIX child-seat mounting points, plus traction control and anti-lock brakes. The optional adaptive cruise control features a collision-mitigation function, too. This attempts to prevent front-end crashes by automatically applying the brakes if it detects an imminent impact. Meanwhile, the model’s new longer and higher nose protects pedestrians more effectively than before.

MINI eCall systems monitor the car's behaviour and can alert the emergency services if the car crashes, while MINI Teleservices keeps an eye on the car's condition and can remotely arrange an inspection or appointment at your local MINI dealer if needed.