Large, practical interior is decent, but many rivals for the Mitsubishi ASX are better

The Mitsubishi ASX's compact dimensions hide a car that's actually quite practical and spacious. There's a good-sized boot and plenty of space for four adults to sit in comfort.

Inside, a large glove compartment and two central cubbies provide plenty of storage space for your bits and bobs and as the ASX boasts a long passenger compartment and a high roof, there's lots of leg and headroom in the back. 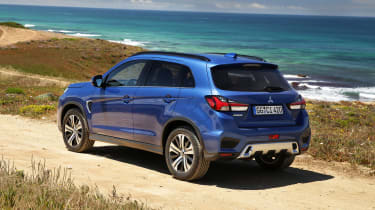 Another bonus: because the front seats are raised, rear passengers can slide their feet underneath, allowing them to stretch out. There's no such luck for the passenger sitting in the middle rear seat, though – there's a hump in the floor that restricts legroom and the seat is raised slightly, so there's fractionally less headroom, too.

The front door pockets can each hold a 500ml bottle and there are three cup-holders between the front seats. The whole point of a crossover is improved practicality, and the ASX does fairly well overall in this respect, although rivals are getting better all the time.

With the rear seats in place, the ASX offers a decent 442 litres of space in the boot - more than the bigger and newer Mitsubishi Eclipse Cross. There's a reasonably wide opening and there's no lip to lift luggage over, making it easier to carry awkward or heavy loads. Fold the split-folding seats flat and that expands to a reasonable 1,193 litres, which is good too. It's perhaps best to think of the ASX as a more spacious alternative to the likes of the Ford Focus hatchback.

The boot opening is fairly big and you do get 30 litres of underfloor storage, allowing you to store rarely used luggage out of the way. That cubby is surprisingly deep, too. Finally, a ‘ski hatch’ allows you to carry long, narrow objects without having to fold the seats.

The ASX is capable of towing 1,300kg – a figure that's par for the course for petrol-powered front-wheel drive small SUVs. A Dacia Duster is a better choice if you plan to tow regularly.