The Mitsubishi Outlander works well as a load-lugger, but it isn't much fun to drive

The Mitsubishi Outlander is a decent tool for getting the family from A to B, but we doubt you’ll have much fun behind the wheel while doing so.

There’s satisfaction to be had from its lofty driving position and go-anywhere four-wheel-drive ability, but light steering means you don’t feel involved in the driving experience and there’s a lot of body lean in corners. In contrast, the Mazda CX-5 and Ford Kuga both feel more like sporty hatchbacks to drive than a traditional SUV.

While it's certainly not an engaging car to drive, neither is it a particularly comfortable one, with bumps thumping through the suspension and into the passenger compartment should you drive over a pothole. Things do get better as the speed increases though, and it's all fairly smooth at a motorway cruise. Mitsubishi has also strengthened the Outlander's body structure and adjusted the suspension for a smoother ride in the facelifted version. 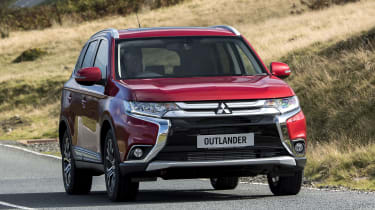 The Outlander performs better than both the Mazda and Ford off the road, with a locking centre differential that provides more grip when the going gets really tough. It’s just a shame that its off-road prowess hurts on-road comfort.

Introduced in mid-2018, there's a 2.0-litre petrol option for Outlander buyers. With 148bhp, it's larger than the engines in many rivals, but it does without a turbocharger. Acceleration from 0-62mph therefore takes a sluggish 13.3 seconds, while a top speed of 118mph matches the diesel.

The petrol Outlander is fitted with a CVT automatic gearbox as standard. Mitsubishi has engineered 'stepped shifting' to make it feel more like a conventional automatic and allow you to take control of its 'virtual' gears using shift paddles behind the steering wheel.