The Mitsubishi Outlander compares reasonably well to rivals from Nissan and Honda when it comes to running costs.

For a long time, the Mitsubishi Outlander was available with just one 2.2-litre diesel engine, but this has since been discontinued – in August 2018, a 2.0-litre petrol was added to the range, returning 32.5mpg and emitting 169g/km of CO2, placing it in one of the highest Benefit-in-Kind (BiK) bands. Costing less than the PHEV model, the standard Outlander could appeal to private buyers with low to medium mileages, but is unlikely to appear on too many company-car lists.

After the first year's CO2-based road tax (generally included in the on-the-road price), all Mitsubishi Outlanders cost £145 a year to tax. 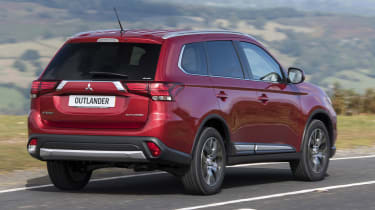 If you do plenty of town driving and fancy lower running costs then it’s worth looking at the Mitsubishi Outlander PHEV, the world’s first plug-in hybrid SUV, which can return a claimed 139mpg, making it one of the most economical 4x4s around. We couldn’t match that figure and, on the motorway, a diesel would be much more economical.

Mitsubishi Outlander used values are in line with its rivals’ – about the same as for a Honda CR-V, but a little less than what the newer Nissan X-Trail can manage.

The Mitsubishi Outlander starts in insurance group 19 for the petrol in Design trim, while the Exceed trim occupies group 20.

Service intervals for the Outlander are every 12 months or 12,500 miles, whichever comes sooner. To take the sting out of servicing bills, the Mitsubishi Service Plan provides maintenance for three years/37,500 miles for £700 – a fee that can be absorbed into the car’s monthly finance payments if required.