New pictures, prices and specs for the BMW M3 and BMW M4 have been revealed in Detroit 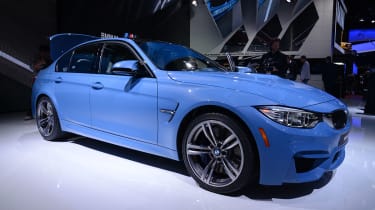 Production versions of the new BMW M3 four-door saloon and BMW M4 two-door coupe have been unveiled at the Detroit Motor Show 2014, with UK deliveries expected from June 2014. Prices for the M3 and M4 will start at £56,175 and £56,653 respectively.

Instead of the uneconomical 4.0-litre V8 petrol engine from the old BMW M3, both new models will use a cleaner 3.0 litre twin-turbo six-cylinder petrol engine. Despite being smaller, the new 425bhp engine is more powerful, making the new cars even faster. That means the six-speed manual will do 0-62mph in around 4.3 seconds, while the seven-speed automatic gearbox reduces that to 4.1 seconds. Standard models are limited to a top speed of 155mph but the optional M Drivers package increases this to 174mph.

The new engine and the use of lightweight carbon fibre body panels also make the new BMW M3 and M4 more fuel efficient than ever before. Each does 34mpg and emits just 194g/km of CO2; a significant improvement over the 23mpg and 290g/km figures of the old M3.

Both cars let the driver adjust the steering assistance and suspension settings between COMFORT, SPORT and SPORT+ modes, while the optional seven-speed automatic gearbox also has sport and economy settings. New, more powerful brakes and a host of electronic systems mean that the new cars should be even more fun to drive, too.

Both the M3 saloon and M4 coupe will be easily distinguishable from the standard BMW 3 Series and BMW 4 Series cars. The M versions get exterior additions such as a new bonnet, bigger wheel arches, a redesigned front grille and a small boot spoiler. A smattering of M badges will also mark the M4 and M3 as the Motorsport derivatives of the normal coupe and saloon models.

The M3 and M4 interiors will share much in common with the standard cars, too, but with unique badges on the doorsills, M logos on the gearshift and instruments, an M-sport steering wheel, plus new chrome trim. Front and rear parking sensors also come standard alongside exterior-folding mirrors. The most obvious addition is likely to be a pair of sports seats in the front, which include electronic adjustment and heating as extras.

BMW has also made a big play on the range of optional extras that include things like unique paint finishes, bigger 19-inch wheels (up from the standard-fit 18-inch wheels) and a range of interior trims. Other options include a 3D sat-nav, fatigue detection, collision warning systems, bright LED headlights and active cruise control that maintains a safe distance from the car in front. Drivers can also spec a Head-Up display with M-specific functions like a gear display, rev counter and Optimum Shift Indicator.

A big part of the M3 and M4's appeal is that they combine supercar performance with everyday practicality and safety. We expect both models to match the standard car's five-star euro NCAP ratings, thanks to a host of airbags and plenty of safety kit. BMW will hope to continue the success of the old M3, which sold more than 40,000 examples worldwide. 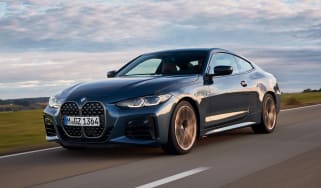