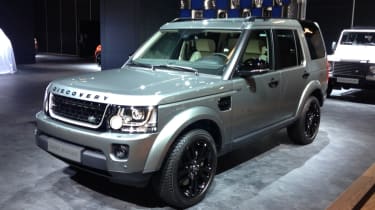 An updated version of the Land Rover Discovery has been revealed at the Frankfurt Motor Show 2013, with a fresh look, better fuel economy and lower emissions.

The 2014 Discovery 4 gets a new front-end, including updated headlights and distinctive ‘Discovery’ lettering on the bonnet. This replaces the existing ‘Land Rover’ lettering, which was a signature feature on all Discoverys since the first model was introduced in 1989. The new car also adds a lightly revised bumper, LED daytime running lights and two new wheel designs. The £1,900 Black Design Pack remains, giving buyers exclusive gloss black trim and unique alloy wheels.

However, it’s under the bonnet where the biggest changes have been made, with the existing 3.0-litre SDV6 diesel engine now being more economical than before. The Discovery’s CO2 emissions have dropped from 230g/km to just 213g/km, while fuel economy has jumped from 32mpg to 35.3mpg – impressive given the size and weight of the car. All models come with the same eight-speed ZF automatic gearbox, with no manual option available.

In addition to the improved fuel economy, the Land Rover Discovery 4 now comes with an updated list of optional safety technology, including a wading sensor for crossing deep water, blind spot monitoring and a selection of cameras to help you pull out at junctions.

Like its recently released Range Rover and Range Rover Sport siblings, the new Discovery will be available with a long list of options, including a top-of-the-range Meridian sound system, complete with 17 speakers. However, at £4,000, it’s not cheap.

Exact prices and specifications are yet to be announced, but check back to this page for the latest information when we get it.