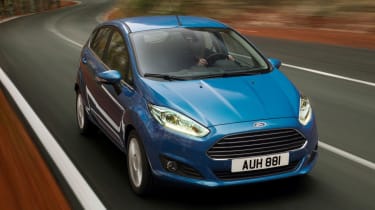 As 2013 comes to a close, we’re taking a look back at the most popular content on CarBuyer over the last 12 months.

Today, we’re looking at our best-performing reviews – and the ones viewed most by you in 2013. Our site traffic comes from all over the world, with interest in a wide range of styles and makes of car. Unsurprisingly, some of our most read reviews are of the UK's best-sellers, but the list features some that are not - read on to find out which cars made the top ten.

The Ford Fiesta looks set to be crowned the UK’s best-selling car for the fifth consecutive year and it also takes the title of most popular review of 2013 here on CarBuyer. The good-looking hatchback is practical, fun to drive and the range of low emissions engines means many of the models are exempt from road tax. We think the Fiesta is excellent overall value – don’t bet against it being the best-seller for the sixth straight year in 2014!

The Dacia Duster was CarBuyer Car of the Year 2013 thanks to its unprecedented value for money. The Duster starts from just £8,995, so it’s no surprise readers were interested to find out more about the bargain SUV. While you don’t get loads of equipment as standard, particularly on the entry-level model, the top-of-the-range Laureate is well equipped and its four-wheel drive makes it an excellent choice for winter.

At third place is the SEAT Leon, the stylish hatchback that is a slightly cheaper alternative to the popular Volkswagen Golf. The new model went on sale in the UK earlier this year and has received plenty of attention thanks to its striking design and sporty drive. There are economical engines available across the whole range - we think the 2.0-litre TDI FR model is one of the best sporty diesel hatchbacks ever sold in the UK and it still returns economy figures of 65mpg and 112g/km of CO2.

The head-turning looks of the Kia Sportage set it apart from other SUVs on the market and its practicality and impressive economy combined with Kia’s seven-year warranty make it a good value option. We found the suspension a little bouncy on some roads but overall the Sportage is a genuine alternative to a family saloon car.

Given how successful the Nissan Qashqai has been in the UK this year, it doesn’t come as a shock to see it’s one of our most searched for cars in 2013. Nissan’s popular crossover model is currently the UK’s fifth best-selling car of the year and there’s a new version due to be launched next year. If the 2014 Qashqai is as good as the old one, expect it to be just as successful.

The Volkswagen Golf is our sixth most-read review of the year and still proves to be a popular choice in the UK for drivers looking for a well-built, desirable hatchback with good performance and a classy interior. While the Ford Focus is a little more fun to drive and the SEAT Leon more striking in its design, the Golf still delivers virtually everything you could want from a car in its class.

The Honda Civic has always been a popular model for CarBuyer since the site was launched three years ago and it’s the same story for 2013. The newest version is not as stylish as the old one but it’s much more comfortable thanks to a new type of suspension. The Civic has a huge boot for extra practicality and is a cheap car to run, with some models in the range exempt from car tax thanks to their low CO2 emissions.

Skoda has built a reputation for excellent reliability in recent years and the Yeti came top of the 2013 Driver Power customer satisfaction survey. The crossover is an impressive alternative to a family hatchback and great value when compared to rivals like the Nissan Qashqai, so it’s little wonder plenty of car buyers have been reading our review online.

The Hyundai i30 is a hatchback made to rival the Ford Focus and the Volkswagen Golf and the Korean manufacturer has packed it full of equipment to help the car succeed against its more established competitors. The i30 is one of Hyundai’s best sellers in the UK, with low running costs and a five-year warrant helping to entice buyers.

The Vauxhall Astra has consistently hovered around fourth position in the best-sellers list for 2013, so it’s a little surprising that the review of the well-rounded hatchback isn’t a fraction higher on our list. Depreciation is still a big issue for Vauxhalls but the Astra, which was relaunched in 2009, is a vast improvement on the old one thanks to a higher quality interior and better overall build quality.