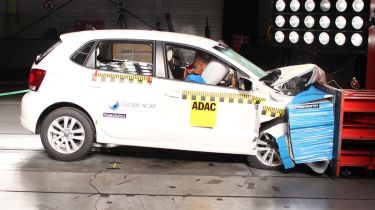 Independent car safety body, Global NCAP, has found that a number of small cars on sale in India pose a very serious risk to their occupants in the event of a crash.

In the first-ever independent crash tests of some of India’s most popular small cars, Global NCAP awarded entry-level models of the Volkswagen Polo, Ford Figo and previous-generation Hyundai i10 zero stars for adult protection. This is in stark contrast to the current European equivalents – the Ford Fiesta and Polo achieved a five-star rating in their Euro NCAP tests, while the old Hyundai i10 managed a respectable four.

India’s best-selling car, the Suzuki-Maruti Alto 800, was also assessed, as was the Tata Nano. The five cars were afflicted by two major problems – namely a lack of structural integrity and an absence of airbags, meaning that too much energy is absorbed directly by the people in the cars in the event of a crash.

In the 40mph NCAP crash test, the Indian version of the i10 achieved a zero-star rating for adult protection, a one-star rating for child protection and was unable to meet the UN’s minimum safety requirements in the 35mph crash test. Along with the Alto 800 and Nano, the i10 was also found to be structurally inadequate, collapsing onto occupants in a crash too easily.

The Ford Figo, which is based on the previous-generation Ford Fiesta platform, achieved zero stars for adult protection and a two-star rating for child protection. What's more, it only met the UN’s minimum safety requirements in the 35mph crash test because the dummy’s head in the driver seat narrowly avoided direct contact with the steering wheel.

Similarly, the Volkswagen Polo achieved a zero-star rating for adult occupant protection, a three-star rating for child protection and couldn’t meet the UN’s safety requirements in the 35mph test. Volkswagen withdrew the non-airbag version of the Polo from the Indian market around the time of the test, so a version with two airbags was also assessed, achieving a much-improved four-star rating. Global NCAP has advised Indian VW Polo customers to be careful about which version they buy.

The results highlight the discrepancy in safety requirements between India and those in Europe and North America – and also show the compromises manufacturers are making on safety in order to make cars cheaper for the Indian market.