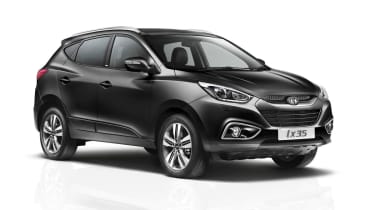 The Hyundai ix35 and Hyundai i30 models will be available as Go! special editions to celebrate the 2014 World Cup and Hyundai’s status as an official partner of this summer’s competition.

The ix35, Hyundai’s crossover SUV model, will be offered in two different special edition trims called Go! and Go! SE, which will both have a 1.7-litre diesel engine, six speed manual gearbox and front-wheel drive.

The Go! model will get more than £1,500 of equipment compared to the standard ix35 SE specification on which it’s based, for only £650 more at £20,750. This kit includes 18-inch alloy wheels, a panoramic sunroof and tinted windows.

The Go! SE special edition of the ix35 is based on the even more upmarket standard Premium Panorama trim, with added kit like a heated steering wheel, front parking sensors and a tyre pressure warning system. This car is actually £650 less than the standard model on which it’s based, at £23,000, despite the £850 worth of extra equipment.

The i30 hatchback will also be offered in two special editions and both will come as five-door versions.

For reviews of both the ix30 and ix35, head over to Carbuyer’s Hyundai page.