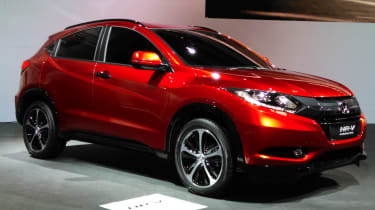 The new Honda HR-V SUV was one of the stars on Honda’s stand at this year’s Paris Motor Show. It will take on the likes of the Vauxhall Mokka and Peugeot 2008. To do that, the new Honda HR-V has a practical cabin, a hybrid engine and may also be fitted with four-wheel drive for extra grip in slippery conditions.

It was first revealed at the Tokyo Motor Show last year, and the pictures you see here are of the European-spec model. It gets eye-catching features such as dual-colour alloy wheels and contrasting glossy black body cladding. Bold creases down its flanks and hidden rear door handles give the car a sporty edge by fooling the eye into thinking it has three doors rather than five, make this one of the sportiest-looking models in its class.

Practicality was high on Honda’s list of priorities for the HR-V, so it has a few clever tricks up its sleeve. The centrally mounted fuel tank doesn't eat into boot space and allows the rear seats to sit lower down on the floor. The car also gets Honda’s Magic Seats. These can be folded completely flat for excellent luggage capacity, or the seat squabs can be lifted up to allow owners to carry tall items in the back. The HR-V is also set to be the biggest car in its class – it's 4,295mm long, which is 160mm longer than the Nissan Juke. 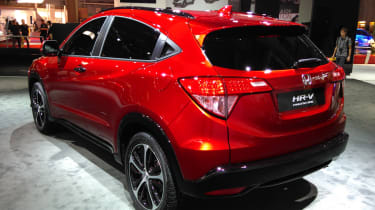 We expect the HR-V will have a high-quality interior, with some eye-catching design features as seen on cars such as the current Honda Civic and larger Honda CR-V.

Engine-wise, the HR-V is tipped to use a 1.5-litre petrol-electric hybrid with 133bhp and a dual-clutch automatic gearbox. The same setup gets the Honda Jazz from 0-62mph in 10.2 seconds, while returning 85mpg and emitting less than 100g/km of CO2. That means the new HR-V should be exempt from paying road tax.

We also expect the HR-V to be offered with a 1.6-litre diesel engine and a basic non-hybrid 1.5-litre petrol. What's more, the Japanese version of the HR-V – called the Honda Vezel – can be specified with four-wheel drive, so expect the same to be offered here, too.

When it goes on sale in a year’s time, the HR-V will slot in between the Jazz and the Honda CR-V in the Honda line-up, with a price of around £16,000. 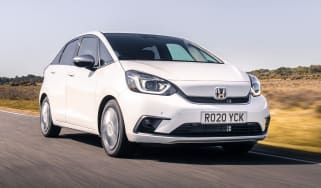